Quote of the Day: “First of all, let’s not forget that four years ago, well after Romneycare was put into place, four years ago you not only endorsed me, you went on Laura Ingraham and said, ‘this is the guy who is really conservative and we can trust him.’ Let’s not forget that you said that,” Mitt Romney said to Rick Santorum at tonight’s debate in Arizona after the former Penn. Senator questioned the former Governor’s conservative credentials.  — GOP Debates, Mesa, AZ, February 22, 2011.

Romney finally admits he isn’t a conservative. Else, why would he attack Santorum’s conservative credentials by attacking Santorum’s endorsement of Mitt Romney in the 2008 campaign?  Only if you think that Santorum was endorsing Romney’s non-conservatism.

In either case, I don’t see how Romney can win that particular argument.

Half of the people in the U.S. didn’t pay any income tax last year. Well, make that almost half, 49.5% according to reports. These are the folks dependent on government either through the various welfare programs or through the “Earned Income Tax Credit.”  I’ve heard one description of the Earned Income tax scheme as the Negative Income Tax. The Negative Income Tax is were the government pays you for not working.  Oh! Wait!  That’s welfare isn’t it?

Only half of U.S. citizens pay federal income tax, according to the latest available figures.
In 2009, just 50.5 per cent of Americans paid any income tax to the federal government – the lowest proportion in at least half a century.
And the number of people outside the tax system could have climbed even higher since as the economic downturn has continued to bite and unemployment has remained high. 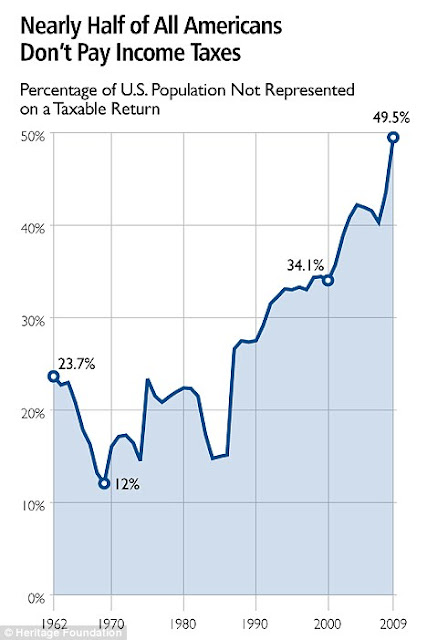 These are the people Obama is depending upon to win his re-election for a second term in the White House.

Sellout?  During the debates last night in Mesa, AZ, Ron Paul appeared to be tag-teaming with Romney against Rick Santorum.  There have been rumors for awhile of a possible deal between Romney and one of the other GOP candidates to nail down Romney’s nomination for President.
Now it appears a deal has been made.  Ron Paul focuses his attacks on Rick Santorum, diverting attention from Romney’s faults and flip-flops, and in return Ron Paul’s son, Rand Paul, is Romney’s pick for Veep.  I guess it’s one way for a Paul to get into the White House. Ron Paul certainly won’t.

On Wednesday, Chuck Todd, NBC News’ political director and host of MSNBC’s “Daily Rundown,” rhetorically asked: “Just what has Romney promised Ron Paul.”
Nobody knows if some sort of bargain has been made, but it is interesting that Rep. Ron Paul has never really attacked Mitt Romney, yet he has frequently attacked more conservative candidates at just the moment they were beginning to pose a threat to Romney. (For example, consider his latest ad, attacking Rick Santorum.)
The timing has been noticeable.
Now, a Kentucky media outlet, WFPL News, might be offering us a clue:

Kentucky’s junior senator says it would be an honor to be considered as a possible running mate for Republican presidential candidate Mitt Romney.

… After a speech in Louisville today, [Sen. Rand] Paul held that door firmly open, saying he wants to be part of the national debate.

… “I don’t know if I can answer that question, but I can say it would be an honor to be considered,” he said.

Of course, this could be much ado about nothing — just a politician answering a question. On the other hand, it is sure to spark more speculation that some sort of deal may be in the works between the Romney and Paul camps. It’s not as if Ron Paul’s campaign hasn’t stoked speculation. As the Dallas Morning News reported, Paul’s national campaign chairman, Jesse Benton, recently said: “Any Republican should have Rand Paul on his short list.”

On the surface, tapping Paul as veep might not make sense. But conservatives are refusing to go along and eat the dog food with Romney — and adding Rand Paul to the ticket would fire conservatives up – and ensure that Ron Paul drops any plans to launch a 3rd party challenge. And just imagine if Romney arrives at the GOP convention needing some of Paul’s delegates to win the nomination?

No, it isn’t an absurd idea at all.

1 thought on “Events and Issues”