The title is misleading. Mrs. Crucis and I haven’t observed Valentine’s Day for a long, long time.  We decided we could better use our money doing something else.  But I needed a post title and that’s what came to mind today.

I was listening to Laura Ingraham when she spoke about the Michigan primary race between Romney and Santorum. During that segment she spoke of some of the PAC ads that were being shown in the state.

I had to share this one by Santorum.  It’s worth a giggle.

Quote of the Day: “There should be no voting without respiration.” — John Fund, Editor, American Spectator, February 15, 2012 speaking on the lack of federal vote fraud investigations on the Laura Ingraham radio show.

Obama submitted his proposed budget this week.  Like his last one, it has virtually no chance of be passed.  His last budget failed in the Senate 97-2.

Unveiling a $3.8 trillion election-year federal budget loaded with deficits, tax increases and hundreds of billions of dollars in new stimulus spending, President Obama said Monday that his plan will “restore an economy where everybody gets a fair shot.”
…
His budget — which calls for a total of $350 billion in short-term stimulus spending, a $475 billion highway program and $1.5 trillion in tax increases on wealthier Americans — has virtually no chance of passing as is, but is intended to highlight the differences between the two parties as Mr. Obama seeks re-election. It would impose a 30 percent minimum tax on those earning $1 million or more.

Mr. Obama also proposes to raise taxes on investment income for families earning more than $250,000. He would tax dividends as ordinary income, raising the top tax rate from 15 percent to 39.6 percent. Taxes on capital gains for the top income bracket would rise from 15 percent to 20 percent. — Washington Times.

One review said Obama’s budget was nothing more than “More taxes and more spending.” Obama’s puppet before Congress refused to answer a question if the budget was a spending increase.  Instead, he responded that the baseline budget had been raised, therefore the additional spending as actually a spending decrease.

Obama and the democrats must think we’re fools to believe such lies.  The cartoon below is Michael Ramirez’s opinion on Obama’s budget. 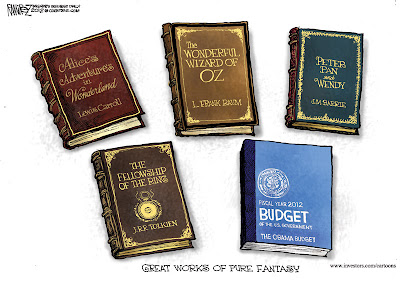