Last Friday, I wrote how the democrats are ignoring law and undermining the Constitution.  Continuing today with that theme I present another example, the failure of the democrats to pass a budget.  It’s been over 1,000 days, more than three years since the last budget was passed. The democrats had overwhelming control of both houses of Congress for two of those three years and failed to pass a budget.  Harry Reid continues to block any budget bill that comes out of the House.  Criminal charges should be levied against Pelosi and Reid, but that won’t happen as long as Obama is in office and Holder is the AG. 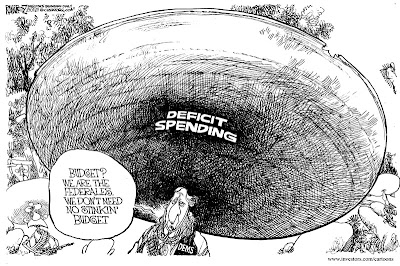 The Investor’s Business Daily, along with the Ramirez cartoon above, posted this editorial.

Posted 02/10/2012 06:33 PM ET
Leadership: Two top Democrats in Congress say the legislature doesn’t really need to pass a budget. Excuse us, but passing a budget isn’t optional; it’s required by law. Is this the future of rule under the Democrats?
House Minority Whip Steny Hoyer is tired of passing budgets as the law demands. He thinks Congress can just keep spending money without any sort of budget.
“The fact is, you don’t need a budget,” he said last Tuesday. “We can adopt appropriations bills. We can adopt authorization policies without a budget. We already have an agreed-upon cap on spending.”
Actually, “the fact is,” Congress is required under the Congressional Budget and Impoundment Control Act of 1974 to pass a spending plan and then have it scored by the Congressional Budget Office and signed by the president. That none of this happens suggests a level of disrespect for the law and the people found only among criminals. (Emphasis mine: Crucis)
As for the “agreed-upon cap on spending” mentioned by Hoyer: How’s that model of fiscal restraint working out? Well, a new report out Thursday notes that Congress has already blown right through the spending “cap” put in place just last summer.
According to the Heritage Foundation, “last week’s Congressional Budget Office report shows they (Congress) have exceeded their official Budget Control Act limits for the current year by a stunning $156 billion.”
Stunning indeed. It’s now been 1,020 days, or 2.8 years, since Congress last passed a budget. Rather than an official document, Congress has passed a series of continuing resolutions and spending bills, periodically raising the debt ceiling so it can spend even more.
Hoyer is not only in his dereliction. On Friday, Senate Majority Leader Harry Reid said: “We do not need to bring a budget to the floor this year. It’s done, we don’t need to do it.” In short, laws are for the little people.
As for President Obama, he’s set to release his own budget proposal Monday. Is he annoyed that Congress has made his budget a dead-letter before it’s even released?
“Well,” said Jay Carney, the president’s spokesman, “I don’t have an opinion to express on how the Senate does its business with regards to this issue.”
This is fiscal gangsterism, nothing else. It has nothing to do with the current fiscal crisis, or the slow economy. It has everything to do with Democrats’ refusal to admit that their unparalleled spending binge and exploding debt will soon lead to a tidal wave of tax hikes on average Americans.