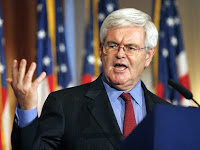 Over the weekend a number of polls raised Newt Gingrich’s position to #1. Horrors of horrors, he was beating Romney by a significant margin.

Newt has been steadily improving in the polls.  Much more so in the last month as he has stood out as the the most informed candidate, consistently doing well in the debates, and attacking the State Media whenever they tried to stir dissent amongst the candidates in every debate.

He was ignored as long as Romney, the establishment’s favorite, was in the lead.  Now Romney is falling and the establishment cannot allow that to happened. The State Media and the establishment have attacked each conservative candidate in turn.  Early in the year and into summer it was Bachmann.  Then Perry appeared, shooting to #1 briefly, and he was the next target.  After that it was Cain’s turn when the State Media created some fictitious charges of sexual harassment when the words of the women involved stated it was NOT sexual!

Starting last week, it is now Newt Gingrich’s turn.  NPR accuses him of being an (Horrors!) insider. He’s no Tea Partier they claim. ABC News claims he was a lobbyist for Freddie Mac (and maybe was the engineer behind the housing bubble collapse) ignoring the fact that Gingrich’s contract specifically forbids lobbying. Freddie Mac had Gingrich do some research. He did. They ignored the results. “The government-backed mortgage fund ignored his advice, he says.”

Bloomberg News says Gingrich earned between $1.6M and $1.8M over nine years in consultation fees according to two people. That calculates to a pre-tax yearly income of approximately $210,000.  Not out of line for any low to mid level executive.

Bloomberg News reported Tuesday that the former House speaker made between $1.6 million and $1.8 million in consultation fees in a nine-year span. Sources told Bloomberg that in 2006, Gingrich was asked “to build bridges to Capitol Hill Republicans and develop an argument on behalf of the company’s public-private structure that would resonate with conservatives seeking to dismantle it.”
Gingrich says he never lobbied on behalf of Freddie Mac and that he simply offered “strategic advice over a long period of time.”
“I was approached to give strategic advice. I was glad to offer strategic advice and we did it for a number of companies and Gingrich Group was very successful,” he said today at a fundraising breakfast in Iowa. — ABC News

These attacks are just from the liberals.  Now let’s look at some from the ‘pub establishment.

When Newt Gingrich says he never lobbied, he’s not telling the truth.
When he was a paid consultant for the drug-industry’s lobby group, Gingrich worked hard to persuade Republican congressmen to vote for the Medicare drug subsidy that the industry favored. To deny Gingrich was a lobbyist requires an Obama-like word parsing over who is and who isn’t a lobbyist. — Timothy P. Carney Senior Political Columnist, Washington Examiner.

If you “examine” Carney’s writings, you’ll find a long list of articles attacking Gingrich on one issue or another.  Can you say, “Vendetta?”
Steve Chapman, another Washington Examiner writer, in a column praising John Huntsman, said this about Gingrich.

…Newt Gingrich’s sale of his soul to Freddie Mac.

The Washington Examiner seems to have declared open season on Gingrich.  In another column by Gene Healy Columnist, Healy smugly declares Gingrich  “Is No Conservative!”

Has it really come to this? Newt Gingrich as the conservative alternative to Mitt Romney? That’s what many in the punditocracy have proclaimed as the former speaker of the House has surged recently in the polls.
Yet a look at his record reveals that Newt is hardly the “anti-Mitt” — he’s Mitt Romney with more baggage and bolder hand gestures.
Every Gingrich profile proclaims that he’s a dazzling “ideas man,” a “one-man think tank.” It seems that, if you clamor long enough about “big ideas,” people become convinced you actually have them.
But most of Gingrich’s policy ideas over the last decade have been tepidly conventional and consistent with the Big Government, Beltway Consensus.

It seems that whenever the establishment’s favorite, Mitt Romney, is in danger of losing his lead the ‘pub establishment surrogates lash out.  This time it’s against Gingrich.
It is the establishment in both political parties that must be removed from power.  On the ‘Pub side, sloughing off Boehner and McConnel would be a great start.  But the priority must be to break the power of the Washington establishment regardless of party.  Then, and only then, will this nation survive and recover.
If we don’t, just look at Europe to see what will happen.  The Eurozone is about to break up. It’s currency is falling. The Brits want their Pound back and the EU is working hard to stop a UK referendum that would have the UK leave the EU.
The kleptocrat establishment of both parties, in congress and in the administration in Washington and in every state capital have to go.

1 thought on “The Establishment Long Knives”