A few of you may have wondered what happened to the ‘Court. Most of the rest of you nay have never noticed I hadn’t posted since early in July.

There was a number of reasons. First, I’d become really, really, really hacked at the GOP from the national to the local level. Second, I needed some time off.

Mrs. Crucis and I decided to seek new climes and took off on a two week excursion out West. We traveled to twelve states and six National Parks and National Monuments.

A few close friends knew we were gone. However, we didn’t broadcast to the world we were away from home until after we had returned. I’m amazed how many give no thought to the security of their homes and blab to the world they aren’t home.

Be that as it may, we are back. It’s time to start saving for our next excursion.

Here are a few pics for your enjoyment. 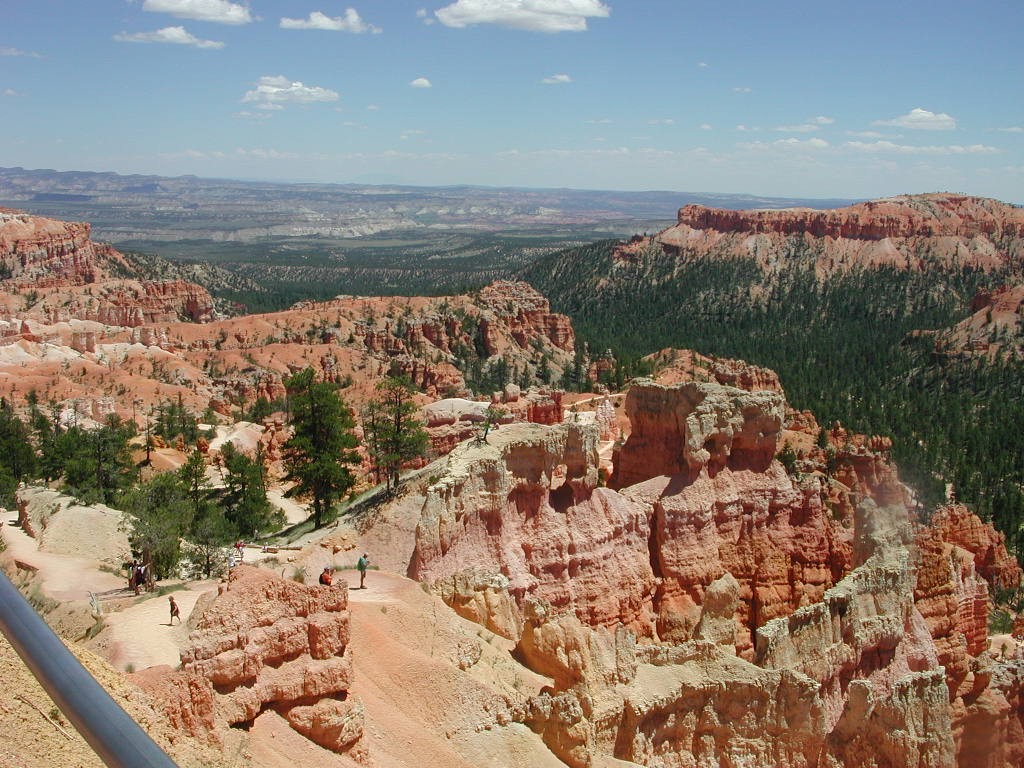 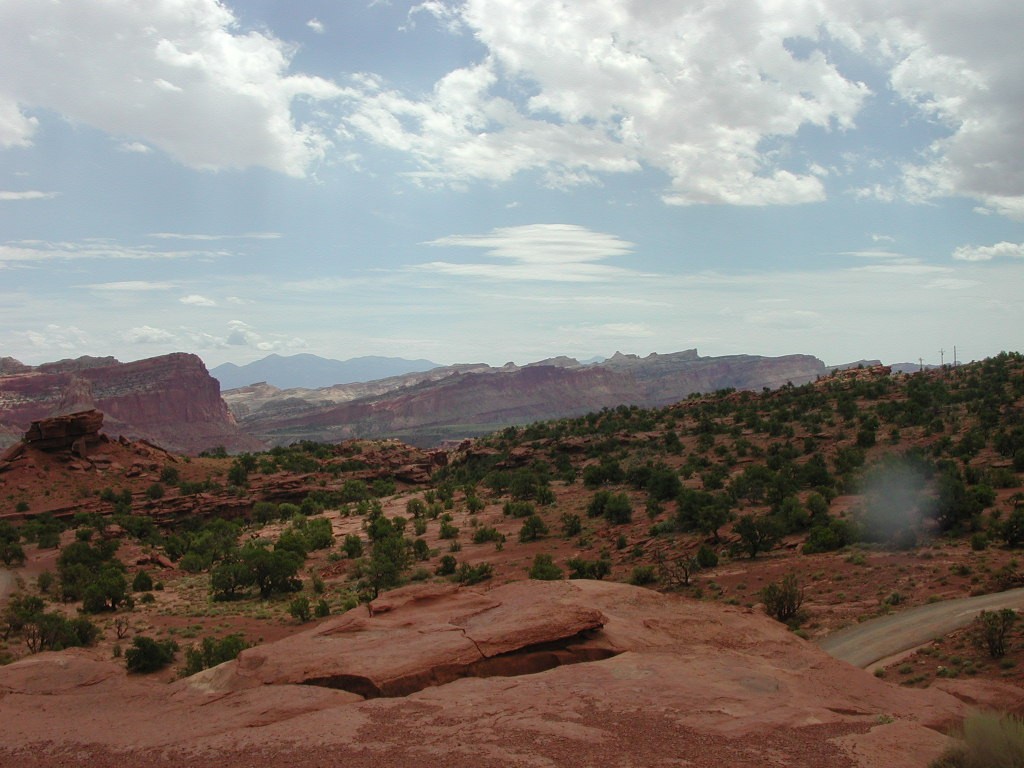 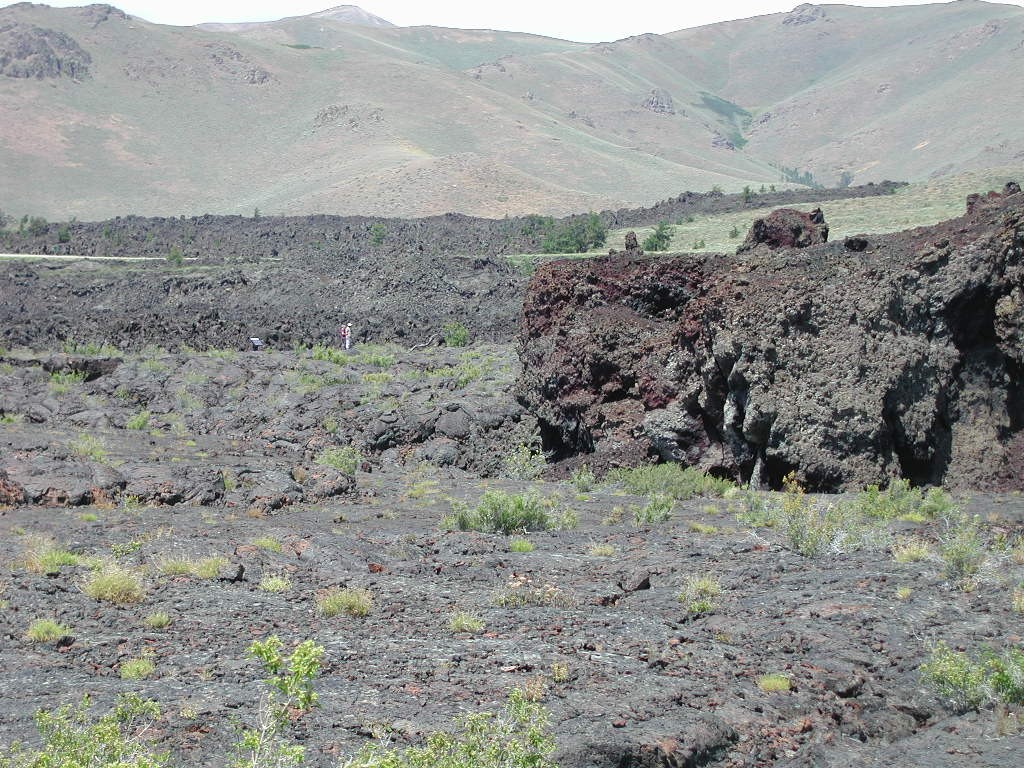 I was surprised to note that the last eruption was only 2,000 years ago. That was this morning, geologically speaking. 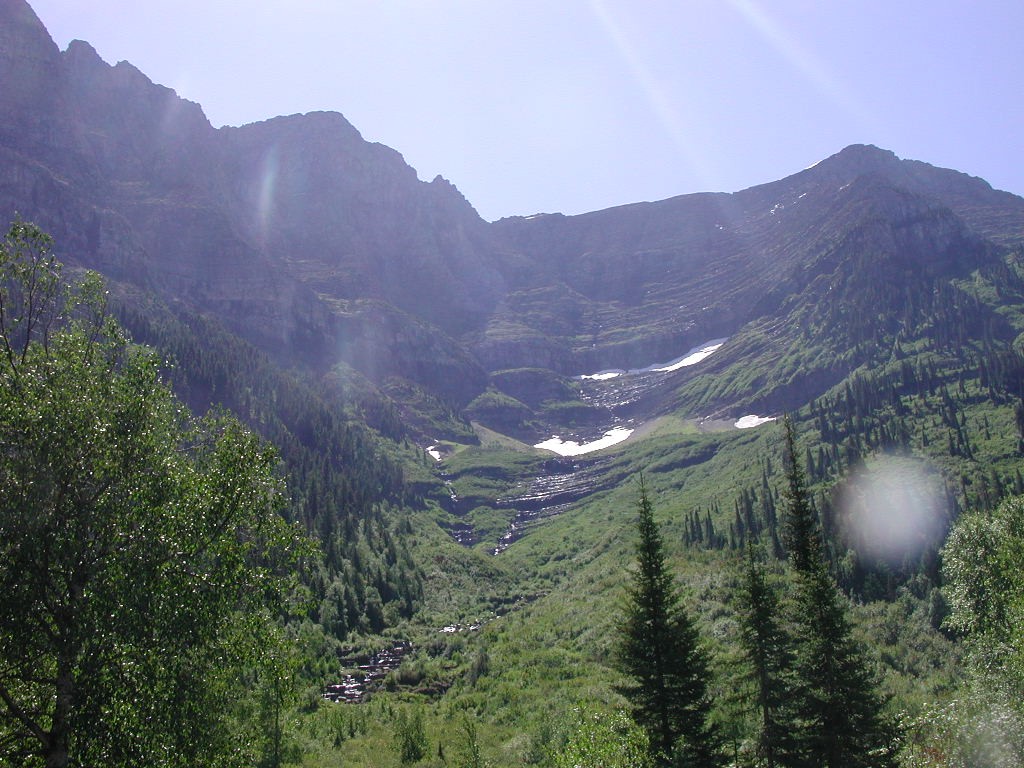 Now you know why it’s called Glacier National Park. We also saw some glaciers on mountains in Idaho. By the way, we discovered that the state crop in Idaho is NOT potatoes. It is hay. We saw one, ten-acre potato field but saw hundreds of well-kept and irrigated hay fields. 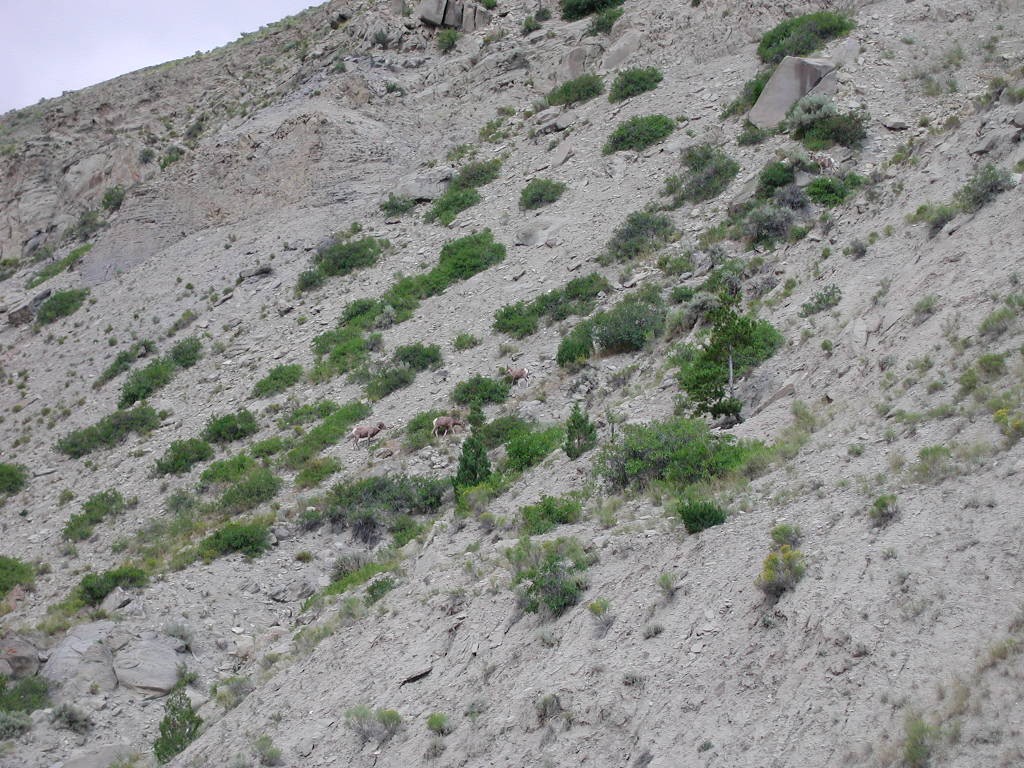 See if you can find them. Mountain goats, Yellowstone National Park, MT

A story appeared today in the Washington Times, “Chief Justice John Roberts may be beyond reconciliation with conservatives.” Is anyone surprised? Roberts received a pass by many in the GOP after his affirmative vote in favor of Obamacare. After his vote to support subsidies for Obamacare, Roberts lost whatever good-will he retained with conservatives and the rank-and-file GOP.

Now an outcast among conservatives, Chief Justice John G. Roberts Jr. may get the chance to redeem himself in the coming months with his stand on affirmative action, the power of labor unions and other key cases, but some on the right say it’s too late for him to salvage his credibility with them.

The court over the next year will issue several highly consequential decisions in cases of deep importance to conservatives. The justices will decide whether labor unions can force nonmembers to pay the equivalent of union dues, whether universities should consider race during the admissions process and, in a case that could dramatically alter the political landscape, how voting districts can be drawn.

Other cases centering on abortion and gun rights also could find their way before the Supreme Court, giving Chief Justice Roberts chances to regain the faith of conservatives who believe he betrayed them with two votes in three years to salvage the Affordable Care Act and cement a central piece of President Obama’s legacy. — Ben Wolfgang – The Washington Times – Sunday, July 5, 2015

For many, it is too late for Roberts to redeem himself. He has proven himself to be unreliable in the votes that have counted. The Justice who should be more despised is Kennedy. His vote was the tipping point on the Court for same-sex marriage and in truth, he has voted with the liberal wing as often as he has for the conservative wing.

The Court had been viewed, before the first Obamacare vote, as having a majority of conservatives. That belief has been dispelled and no conservative, now, has any faith that the Court will support any conservative issue.

Ramp tales: stories told by old pilots. Some tales are of questionable veracity.

I used to fly. Not a lot but it was an item on my bucket list. One item that I finally accomplished in my fifties. Although I was an Air Force veteran, I didn’t learn to fly until long after I was out. My flight instructor was Charley Craig, a 30,000+ CFI based at the Gardner KS Municipal Airport—K34 on the Kansas Sectional.

Gardner is a small airport; not much different from many small town airports. It has the usual string of T-hangers, a small FBO for dispensing gas, cokes and the often needed restroom, and a small job A&E shop. Charley, Ellen (Charlie’s wife), his sons and daughters ran the FBO and a flight school. Charley was my CFI or Certified Flight Instructor.

During this period I used to spend my Saturdays flying with Charley or hanging out with an assortment of Ramp Rats, most of whom were former WWII and later military pilots. Whenever pilots gather, Ramp Tales are told. Frankly, I’ve forgotten most of them, but I did acquire a few of my own.

One of the Ramp Rats was a former WW2 pilot, Billybob. I don’t actually remember his name, but Billybob seems appropriate. Billybob was a US Army Artillery spotter. He flew a J-2/J-3 olive green Piper Cub over most of Italy and other parts of Europe. 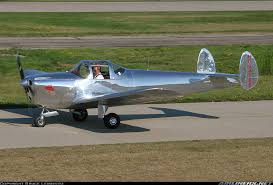 Billybog kept his Air Couple stashed at a private field that had no services. Whenever he needed fuel…or groceries for that matter, Billybob would fly in to Gardner, top off his Air Couple and beg a ride into town to buy whatever he needed. Usually there was always someone around who would chauffeur Billybob around. I did myself a time or two.

Billybob loved his Air Coupe. It was highly polished bare aluminum. Billybob had no radio in his Air Couple. If he did, he never used it as far as I know. The first inkling that Billybob was on his way in was seeing a shiny spec entering the pattern for a landing. Another Ramp Rat told me that at one time, Billybob had painted his Air Coupe a bight canary yellow. A color also known as Piper Cub Yellow. The story told by that Ramp Rat is why Billybob stripped the paint off his plane leaving nothing but bare aluminum.

Pilots and Ramp Rats in particular have a weird sense of humor. Unusual because most of their humor is expressed in practical jokes. Those jokes tend to be more mental than physical. No pilot would interfere with the safe operation and flight of an aircraft. Just about anything else, however was fair game.

One of the favorite excuses of weekend pilots to fly is to fly to fly-ins. Billybob, like many pilots, loved to show off his plane. He would go to a fly-in, park and display his Air Coupe with a placard mounted inside its bubble canopy giving all the Air Coupe’s specifications and history. A bright yellow airplane drew the attention at fly-ins like honey draws bees.

Garner, K34, has an annual fly-in sponsored by a local EAA chapter. When fly-in time arrived, Billybob and his bright yellow Air Coupe would arrive without fail. A number of the local Ramp Rats began to call the yellow airplane, Tweety, after the yellow cartoon character.

One year, a Ramp Rat replaced Billybob’s placard with another one that contained, along with a more humorous description of the Air Coupe, a large cartoon—Tweety. That new placard drew all the kids and it wasn’t long before Billybob’s Air Coupe was surrounded with kids, some of whom asked for rides in Tweety.

Billybob was a bachelor. He’d never been married to anyone’s knowledge and had few, if any, relatives. Kids terrified him. At first he would discard the new placard and politely refuse the requests for rides.

A number of Ramp Rats entered into a conspiracy. They would follow Billybob to fly-ins and, when Billybob wasn’t looking, switch his placard with a Tweety placard. Billybob became known as Tweety on the Fly-in and Airshow circuit.

At first, Billybob took it all in grudging good humor. That is until a Ramp Rat took the joke one step further. At one airshow, a small local thunderstorm passed through. Everyone headed for the FBO and hangers to get out of the rain. While everyone was distracted, one enterprising Ramp Rat scotch-taped the name, Tweety, in foot-high letters on the fuselage and wing of Billybob’s Air Coupe.

It was the last straw. The next time Billybob was seen, his Air Coupe had been stripped of all paint except for his registration number. Instead of the bright yellow paint, the Air Coupe was bright, polished aluminum. Tweety was gone, but not the name.

I was told this story one day when I was hanging out at Gardner. I had been up with Charley Craig practicing timed turns. It was hot and I was cooling off under the shaded porch of the FBO with a Coke and a small scanner at my side that I used for eavesdroping on the local unicom. I noticed a bright spec low on the horizon and over the unicom came the call, “Tweety arriving!” A Ramp Rat standing nearby saw my surprise and told me the story.

In another sense, the call was a safety warning. The  pattern height for Gardner was 1000′. Billybob, perhaps due to his wartime experience as an artillery spotter, had an aversion to flying at altitude. He preferred to fly lower, much lower, as low as was legally allowed for the location. At times, he ignored the minimum height rules when entering the pattern. That could cause problems.

However, Billybob, was well liked, given his eccentricities. The local pilots knew his habits and kept an eye out for him. As long as he didn’t cause problems with transient pilots, no one called him on his practices.

Billybob is gone now. His Air Coupe was sold along with the rest of his estate. There’s nothing left except the echo of an announcement over the unicom, “Tweety arriving” in remembrance of Billybob and his bright yellow Air Coupe, Tweety.