Mrs. Crucis had cataract surgery on one eye yesterday.  All went well.  She has a followup visit today.  I thought, yesterday, the followup would be at noon.

I was wrong. It’s earlier.

My blog planning hit a snag and I don’t have a post ready.  My bad.

On the other hand, for the first time since before we were married, Mrs. Crucis is walking around the house, fixing breakfast—all without glasses!  Before, she needed glasses just to see anything further than a foot away.  What a difference.

I’m feeling almost back to normal, too.  The last set of meds didn’t make me feel “weird” like those from last week.  No, they just prevented me from sleeping. Since Monday, if I got three hours of sleep, I thought I was doing good. Wednesday night, I may have gotten two hours.

I stopped taking the meds.  Last night was the first time since I got sick that I had a decent amount of sleep.

Y’all have a great weekend.  Mrs. Crucis and I certainly will.

Mrs. Crucis is having cataract surgery today so I don’t have my usual prep time for today’s posts.  Here are some cartoons to tide you over.  There’s a good list on-hand today. 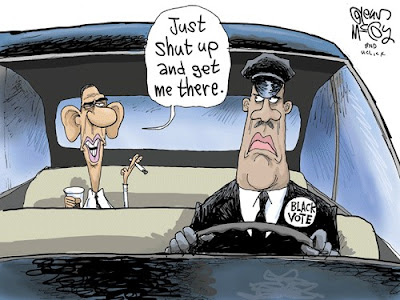 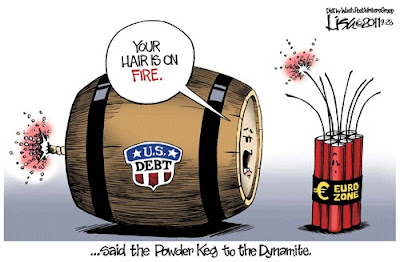 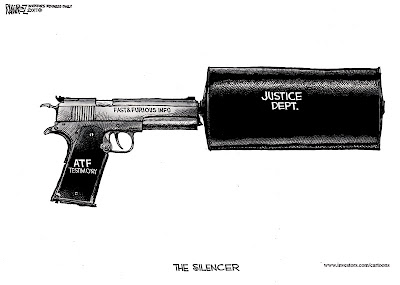 Like Loading...
Update: 10AM.  We’ve another example of dems who think our Constitution, Republic and democratic principles are just too…“too much of a good thing.”
The former director’s of Obama’s Office of Management and Budget, Peter Orszag, thinks so.  In a column he wrote for The New Republic, he says…

During my recent stint in the Obama administration as director of the Office of Management and Budget, it was clear to me that the country’s political polarization was growing worse—harming Washington’s ability to do the basic, necessary work of governing. If you need confirmation of this, look no further than the recent debt-limit debacle, which clearly showed that we are becoming two nations governed by a single Congress—and that paralyzing gridlock is the result.
So what to do? To solve the serious problems facing our country, we need to minimize the harm from legislative inertia by relying more on automatic policies and depoliticized commissions for certain policy decisions. In other words, radical as it sounds, we need to counter the gridlock of our political institutions by making them a bit less democratic. (Emphasis added: Crucis) — The New Republic, Too Much of a Good Thing, Why we need less democracy, September 14, 2011 | 9:46 pm.

We’ve known all along the libs, leftists and dems really didn’t like our republic nor its institutions.  The Constitution, the principles behind those founding documents and the institutions created from them are impediments to the statists in both parties.
What they truly desire is an oligarchy of elites who governs the masses “for their betterment.”

1. A small group of people having control of a country, organization, or institution.

2. A state governed by such a group.

Of course the betterment always seems to be of the elite instead of masses they rule.  The operate word in that last sentence is “rule”, not govern.  There’s a difference.
Liberty? Democracy?  That’s for us, not for them, so says the elites.
***

Unbelievable. For a governor of a state to speak just a thing.  And, it public, too!

As a way to solve the national debt crisis, North Carolina Democratic Gov. Beverly Perdue recommends suspending Congressional elections for the next couple of years.
“I think we ought to suspend, perhaps, elections for Congress for two years and just tell them we won’t hold it against them, whatever decisions they make, to just let them help this country recover,” Perdue said at a rotary club event in Cary, North Carolina, according to the Raleigh News and Observer. “I really hope that someone can agree with me on that.”
Perdue said she thinks that temporarily halting elections would allow members of Congress to focus on the economy. “You have to have more ability from Congress, I think, to work together and to get over the partisan bickering and focus on fixing things,” Perdue said.
North Carolina Republicans immediately scoffed at Perdue’s proposal, pointing out to her that elections hold politicians accountable for their actions. “Now is a time when politicians need to be held accountable more than ever,” North Carolina GOP spokesman Rob Lockwood said in an email to The Daily Caller. “To suspend an election would be removing the surest mechanism that citizens have to hold politicians accountable: The right to vote.”
Read more: http://dailycaller.com/2011/09/27/nc-governor-recommends-suspending-democracy-to-focus-on-jobs/#ixzz1ZBnRrRME

Do these people really want a civil war?  That’s what would happen as surely as the sun rises in the morning.

“…solve the national debt crises.”  The debt crises would be nothing compared to the new crises the dems, and anyone else supporting the idea, would have on their hands if they tried this.

I don’t feel like writing today. Here’s something by Glenn McCoy to tide you over.

I used to joke about that—surviving from one day to another.

I’m into my 10th day being sick. There have been a lot of ups and downs. For the last two days, I’ve incrementally been better. Overall yesterday was good. Yesterday evening not so good. Today, my goal is a good day and a good evening.

Update (9/27/2011).  Great day yesterday. Went to the doc yesterday afternoon and got some different meds.  Felt great until it was time to go to bed.  Couldn’t sleep.  Didn’t doze off until after 2:00AM, and then intermittently.  Note-to-self: don’t take meds in the evening. One day at a time.

At least, I’m feeling good enough to post something on the blog.

There are few things more frightening than cops with guns.  One of those few things are cops with SAMs.  Yes that’s right. The ability to shoot down an aircraft “if necessary.”  I can’t see the NYPD hauling around the large caliber anti-aircraft guns that would be effective, so, reading between the lines, that means SAMs.

I wonder if these are some of the ones missing from Libya?

NYPD chief: Police could take down plane if needed

NEW YORK (AP) — The chief of the New York Police Department says city police could take down a plane if necessary.

Commissioner Ray Kelly tells CBS’ “60 Minutes” that after the Sept. 11 attacks, he decided the city couldn’t rely on the federal government alone. He set about creating the NYPD’s own counter-terrorism unit. He says the department is prepared for multiple scenarios and could even take down a plane.

Kelly didn’t divulge details but said “obviously this would be in a very extreme situation.”

This comes from the police department that needed 50 rounds to kill an unarmed man on his wedding day. There are other incidents by the NYPD when their officers killed an unarmed man.
Wonder what they’d do if Grandpa’s Piper Cub strayed off course over NYC?  Knowing the itchy trigger fingers of the cops in NYC…Boom!
Oh yes, this from the city who are afraid to allow their citizens the means to defend themselves but acquire heavy artillery for themselves.  More hypocrisy from Mayor Bloomberg.
***

Obama has been out campaigning and claiming to be a “class warrior.”  Of course we know what that is. Obama’s the enemy of the Eeeevile rich or anyone who still has a job, and an enemy of corporations and small businesses who provide those jobs.

Glenn McCoy has this view of Obama’s travels.

Like Loading...
Update: 5:00PM
The doc confirmed that I was hyperventilating.  Gag!  What a feeling!  I wouldn’t wish that sensation on my worst enemy.  Well, maybe BO. He deserves it.

Since I had some chest “cramps” last week, he did an EKG and another visit to the vampire.  EKG is fine, blood-sugar is fine. I’ve never had a history of any cardiac issues but since I’m at retirement age, I suppose it’s reasonable to check everything out.

His diagnosis confirmed mine: hyperventilating.  I’m still fighting the sinus infection that is leaving me weak, but if I can control my hyperventilating, I should be much, much better.

I now carry a little brown bag along with me. Unfortunately, it’s empty.

This is going to be short. I’m off to the doc again in a bit.

This has been the most…uncomfortable week in my memory.  It started last Saturday.  I thought I was getting a cold—sneezing, running nose, congestion, all the usual symptoms.  It appears now that it was a sinus infection.  I’m a chronic sufferer of those things.
As usual, I took a cold tab.  Yeah, is was two years old and out of date but all that means is that it lost some potency.
Big mistake.

I’ve never taken any illegal drugs. Never smoked MJ. In fact, I’m leery of taken any drugs even those prescribed for me. About an hour after taking that cold tab, I was wired!

I wasn’t congested anymore, but I felt all that post-nasal-discharge in the back of my throat like a rubber sheet. It felt like my throat was closing.

As long as I stood, it wasn’t too bad.  If I sat down and inclined any degree at all, the sensation came back.  I couldn’t sleep. The fact was, I was afraid to sleep because it felt as if I’d smother if I laid down, or just sat in a recliner.

I paced.  All night. Zero sleep.

Come the next morning, Sunday, the tab had worn off and after eating a scrambled egg, I felt better but still shakey.

My wife took me to urgent care. I received a ‘script for an antibiotic and a nasal spray with some suggestions to relieve the congestion.

I never want a repeat of Saturday night.

But…I’m still not feeling all that better.  I woke up this morning, still sleeping in a recliner, thinking, “I feel pretty good!”  Then I stood up and it was like a return to Saturday night.  I’m breathing OK.  In fact, I’ve not had any real problem breathing, just the sensation of a lack of breath.  When I was checked for oxygenation levels Sunday, I was at 95%.

I still feel like crap and there’s a gathering near Jeff City Saturday that I’d like to attend. So I’m off, back again to the doc.  This time my personal one.

Most likely this is all in my head, figuratively and literally speaking.  I just don’t want to continue feeling like…crap.