Growing up on the farm, we had a few traditions—mostly imported. New Years was a family holiday. Kith ‘n kin visited on Thanksgiving and Christmas. New Years, however, was just Mom, Dad, me and later Grandma.

The farm was located in the middle of coal country in southern Illinois. The population was mostly Scots/Irish/English who brought mining skills learned in the coal mines of England and Wales. During the Union/Mine Owner wars of the early 20th century, many East Europeans were brought in as strike breakers. After the strikes were resolved, the East Europeans—Poles, Hungarians and various Russians, became good Union members and added their traditions to those of their predecessors. However, the new traditions were more aimed at religious holidays than of New Years.

One tradition that became almost universal was the tradition of the gift of coal. The tradition was that the home would have good luck if the first person to cross the threshold in the new year was a dark Englishman, Welshman, Scot, Irish (add other nationality here) wishing everyone within Happy New Year and bringing a gift of a bucket of coal to warm the hearth. My Dad fit that job description and since I was the next oldest (only) male in the house, I assisted with the tradition.

Come New Years, around 11PM, earlier in some locales, the men of the house would leave with a bucket of coal, their shotgun, and, for those who imbibed, a bottle or mason jar of holiday cheer. In town, they would usually head for the closest bar or other gathering place and wait for the mine whistle indicating midnight.

At the farm, we had three close neighbors; John Davis, our neighbor just across the road from the farm, Sy Malone, a friend of Dad’s who had a small farm a quarter-mile to our west, and Ken Shoemaker who lived a couple of hundred yards to the east. All were coal miners or had been. Ken Shoemaker was also a bus driver for the High School. John’s place was the most central of us and he had a heated barn for his heifers. That was our gathering place.

Ken and Sy usually arrived early bringing some ‘shine that Sy made in the woods in back of his house. John would join next. By the time Dad and I arrived, they were sitting around a kerosene heater and usually well lubricated. The men talked and drank. Dad sipped tea from a thermos he had brought. I listened. I heard quite a bit of gossip, bragging and stories waiting in that barn.

Remembering those times, I’m amazed that with all the drinking that occurred, there was never a firearm accident. I think folks were more used to guns in those times. Many were WW2 veterans such as Ken and Sy Malone. John Davis added to his mine income as a trapper and occasional commercial meat hunter. Dad was a long-time hunter as well. Experienced folks acquire gun-handling habits that just aren’t broken even when one has consumed large amounts of alcohol.

In coal country, the time standard was the mine whistle. The whistle blew at shift change each day, at noon, and on New Years Eve, at midnight. The closest mine to the farm was about five miles away; Orient #2 on the north edge of West Frankfort. Dad, John and Sy worked there. Ken worked occasionally at Orient #3.

When midnight neared, everyone loaded their shotguns—usually with #6 or #7 1/2 shot, and went outside to listen for the whistle. At the stroke of midnight, delayed only by distance, we heard the mine whistles; Orient #2 to the south, followed by Old Ben #9 to the south-east. Another whistle arrived from the west, followed slightly late by Orient #3 from the north. The men raised their shotguns and in turn fired three times into the air. Nine shots in all. As the sound of their shots faded away, I could hear the patter of falling shot and the echoes of other shotguns rolling in from surrounding points. In the far distance, I could hear the Sheriff let loose with his Thompson sub-machine gun that he had confiscated from Charlie Birger just before Charlie was tried for murder and later hung—the last public hanging in Illinois.

As the gunfire died away, each man picked up his bucket of coal, his shotgun and began the trek home to be the first dark-headed man to cross the home’s threshold. In lieu of hair, John Davis wore a dark hat.

It was a short walk for Dan and me, just across the road and up the drive. Dad walked up to our front door and knocked. Mom would answer and Dad would exclaim, “Happy New Year!” and we’d go inside to the warmth. Mom would have coffee or more tea for Dad, a glass of milk for me and either cake, sweet rolls or home-made doughnuts depending on what she and Grandma had made that day.

New Years was a family celebration, but New Years Eve was a male celebration, in the cold or in a warm barn. A gathering of men, boys, talk, drink and memories. A communal celebration of the coming year. 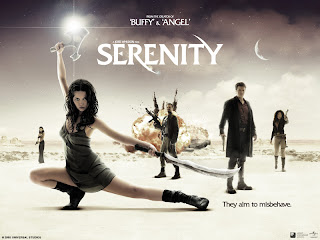 For those of you who like the movie “Serenity” from the TV-series, “Firefly“, it will be shown this coming Saturday, January 3rd, 2009 at 8PM Central on the SciFi Channel.

Back some years ago when I was shooting a lot of IDPA and bowling pin matches, I reloaded most of my .45 and .40 brass. I shot a Kimber Stainless Custom in .45ACP and a Colt Mk IV in .40S&W. I reloaded both on a Lee Progressive press. It worked quite well.

I usually reloaded around 1000 or more rounds of each caliber per month. After a few years of use, the Lee indexing mechanism broke. I could have gotten it fixed, but I didn’t. I had built up quite an inventory of reloaded rounds of both caliber.

About the time the Lee press broke, the pin-shooting and IDPA groups broke up. My shooting volume dropped from a couple of thousand rounds each month to just a couple of hundred. In fact, until CCW was passed in Missouri, my shooting declined almost to zero.

Now a few years have passed. While my shooting declined, it didn’t reach zero. I got interested in benchrest, highpower and varmint shooting. I added an AR, a Garand and a Rem700 in .223 to my collection and started reloading rifle cartridges on a single-stage RCBS press.

While my rifle collection has grown, so has my handgun collection. In 2004, CCW became legal in Missouri. My two existing pistols were large and I needed some new. I bought a Para LDA CCO (.45ACP) for carry. Practice ammo was not a problem. I had several thousand rounds of reloads remaining from my match days.

Santa was very good to me. I got two $50 gift cards from Cabelas and two coupons worth an additional $30 off. My wife and I will be leaving for Wally World later to check out a new treadmill and then off to the Bullet Hole (an indoor range in Overland Park, KS) for some targets and then to Cabelas.

I haven’t anything special on the wish-list. We’ll just see what is available. If nothing else, I can always use some more ammo. The gun club’s indoor range is open 24×7 and the temps are warming up. I could use some more practice with the 442 and M&P.

Speaking of the S&W M&P Compact, my IWB holster from Dave Workman at D and D Gunleather arrived Christmas Eve. It’s black with a black pistol. I’ll try to make some pics and post them.

I like Dave’s IWB holsters. They are handmade, have nice thick leather with a leather shield betwixt the pistol and your body. His turn around is very quick, two weeks in this case. Dave has a limited selection of holsters, but I can highly recommend them. 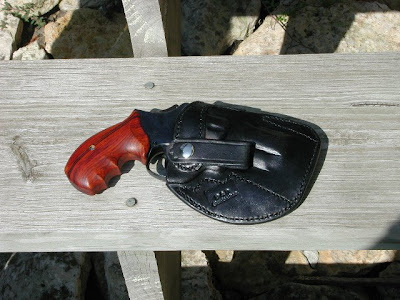 Hope you all have as good a Christmas.

I’m officially on vacation. Blogging may be light until after New Years.

Y’all have a Merry Christmas and a Happy New Years. 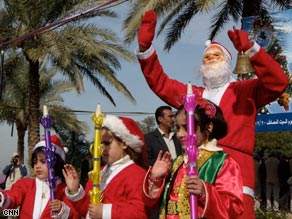 We had our annual Christmas dinner at church today. My wife took her home-made giblet gravy. As an aside, anyone realize how hard it is to buy just giblets? We’re having ham for Christmas and she didn’t want to buy a turkey just for the giblets. So she bought a whole baking chicken that said giblets include. Wrong! She finally scrounged some.

It was four degrees when we left for church and ten when we got home. The dungeon is cold. After the obligatory Sunday afternoon nap, I came downstairs to do some surfin’ and blog readin’. Even with the space heater on max and only two feet away, it’s still cold. I’m finishing this and going upstairs, grab a cat, and get warm. (Who needs dogs when you have a couple a cats nearby?)

I have a early circuit turn-up tomorrow, four trunk groups, 33 DS1s. It will be a long day. I’m taking the rest of the year off when I finish.