…Carly Fiorina. She announced her candidacy for President yesterday. She wasn’t present at the NRA Annual Meeting last month, but she did sent a video which is more than Rand Paul could bother himself with and many present wished Jeb Bush, Lindsay Grahamesty and the Huckleberry had done. 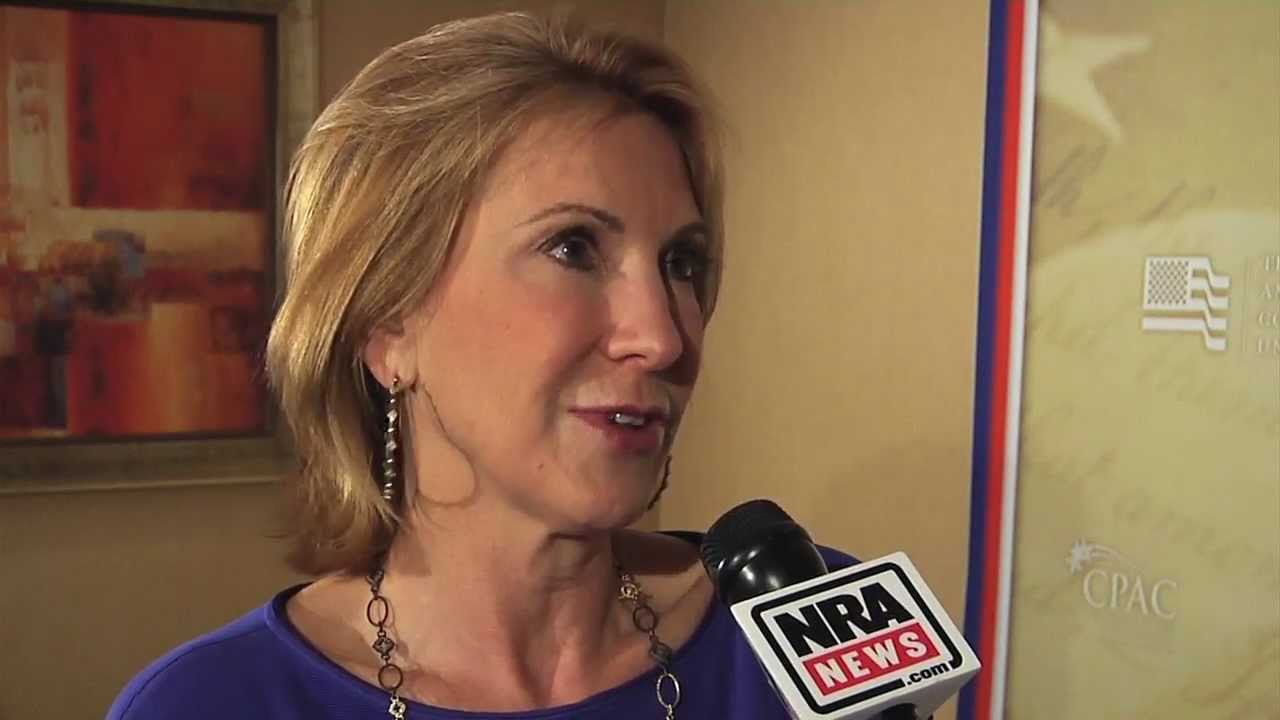 She was applauded at the NRA meeting in Nashville as were all who spoke there. I should note the applause for Jeb and Grahamesty was more perfunctory. All in all, Fiorina’s topics from her video was complementary with those of the other conservative speakers.

Today she is making the rounds of the talk shows. She spent some time with Glenn Beck this morning and, I believe, she’ll be with Hannity this afternoon.

I was in the shower, listening, when she said something that I’ve heard no other candidate, certainly not Jeb, Grahamesty nor Huckleberry say. She said the government should be placed on a zero-based budget like the private sector.

A business knows how much it can spend. It has a reasonable expectation of its income, and it knows every penny that will be spent. Spending cannot exceed income. Unlike the government, a business cannot arbitrarily print off a few billion dollars if the treasury is low.

I retired from Sprint a few years ago. One of the exercises we expected every Spring was budget submissions. The process was this. The board allocated funds for the company. The executives broke that down by divisions, then to departments, continuing down the the project and, in some cases, the individual.

Next came the project that the business side wanted done. From that point a winnowing process began between the business side that wanted products and the development and operational side who would build, implement and maintain those products. As each product was analyzed and and expensed, those projects went up the management chain to be justified. If the project couldn’t be justified, it was allowed to be resubmitted with a reduced cost or cut. The project cost also includes the cost of the employees who develop, test, implement and maintain the product.

When this idea has been floated before, one complaint is that the process ‘takes too long.’ Yes, it does take a while. Sprint built next years budget, this year. It took about a quarter to get it done and approved. But, during that quarter, we also performed our regular jobs. No missed delivery dates allowed just because we had to work on a budget. In addition, our product cycle from concept to development to production was often much less than a year.

When one is employed in the private sector, you quickly learn what ‘multi-tasking’ really means. It means you deliver all your projects on time and on budget—or you’ll soon be escorted out the door.

Carly Fiorina proposes to do the same to the Federal government. Just imagine the same rules applied to all departments and agencies of the US government! I wonder how well the IRS, EPA, FCC, the NLRB and many of the other departments, like Education and HHS would fare? I would not be surprised if many withered away or were consolidated, at a reduced level, into a governmental department.

I hope other candidates take up Carly’s idea. The country desperately needs it. I have no doubt our federal debt would not last long if Carly’s budgetary rules were imposed on the national government.

Some interesting statistics are coming out after the Baltimore riots. One statistic that I saw said that over 20% of the employed in Baltimore, worked as government employees. Just image what that percentage would be if you included everyone on the welfare rolls. Are not welfare recipients paid by the government? They should be included, too. When you examine the demographics of Baltimore, you will find that half of the Baltimore police are black and most of the elected and appointed officials of Baltimore are black.

With those facts on the table, where is the white oppression? The whites aren’t in control of the city and hasn’t for over thirty years.

The feds have given Baltimore billions, yes, billions with a ‘B’! Where has those billions for education, jobs and infrastructure improvements gone? I wonder how much slithered into private political pockets.

Add to that mess, is this item I came across this morning. The Baltimore PD went to the DoJ for funding of a training program for their street officers. Holder turned them down—but Obama claims it’s all the ‘Pubs fault. One more lie by Obama and the democrats.

Chip? What chip? It is a chip off the stone of GOP solidarity. Boehner and McConnell, in order to preserve their political futures, have started a war they cannot win. In the short term, as the GOP continues to fragment, the only winners are the democrats. In the long term…who knows. The real question is whether, when all the chips have fallen, will there be anything to rebuild—of the nation and the Constitution?

The Ryan-Murray budget ‘deal’ is another chip off that rock of GOP solidarity. Ryan, Boehner and the rest of the Washington establishment are willing to risk everything to avoid confrontation before the 2014 elections. Instead, they have risked the entire country to gain a little time.

What Ryan, Boehner, Cantor, McConnell and the others have done is to increasingly solidify the opposition of conservatives against them. The article below from the Washington Times supports the reports of growing opposition to the budget deal.

All-out war breaks out in GOP over budget

All sides were rating the winners and losers in the deal struck a day earlier between House Budget Committee Chairman Paul Ryan, Wisconsin Republican, and Senate Budget Committee Chairwoman Patty Murray, Washington Democrat. The modest deficit-cutting deal had some sweeteners for defense contractors and oil drillers, while air travelers, federal workers and some corporate executives would take a hit.

But most of the passion focused on the politics of the deal, with Mr. Ryan, Mr. Boehner and the House GOP leadership defending their handiwork from attacks from conservative colleagues on Capitol Hill and from outside groups such as the Club for Growth, Heritage Action and Americans for Prosperity. Critics said the agreement effectively raised taxes in the form of higher fees, failed to restrain entitlement programs and permitted new spending in the short term in exchange for vague promises of long-term cuts.

Rep. Jim Jordan, Ohio Republican, said in an interview that Republicans sacrificed their biggest point of leverage — the tough “sequester” spending cuts that were already in force — in the rush to get a short-term deal that did not address the long-term costs of Social Security, Medicare and Medicaid.

“I am against [the deal] from just a basic point that we embarked on a position at the beginning of the year that said, ‘We will keep the sequester in place unless we get to make changes on mandatory spending that will save those program and put the budget on path to balance within the next 10 years,’” Mr. Jordan said.

Added Chris Chocola, president of the fiscally hawkish Club for Growth, “Apparently, there are some Republicans who don’t have the stomach for even relatively small spending reductions that are devoid of budgetary smoke and mirrors. If Republicans work with Democrats to pass this deal, it should surprise no one when Republican voters seek alternatives who actually believe in less spending when they go to the ballot box.”

Unfortunately for fiscal conservatives, Boehner is pushing for a vote on the ‘deal’ as quickly as he can. The vote could take place as early as today and he, Boehner, wants a quick vote to prevent “interference” from conservatives. Heritage Action, Club for Growth and the American’s for Prosperity initiated call-in campaigns yesterday.

The lines are being drawn as more ‘Pubs shift to one side or another. Some will continue to try to sit on the fence, fearing offending one side or the other. Like so many in the months prior to December 1860, they will discover that fence-sitters will be despised by both sides and have support from neither.

Here is some links to addition columns in today’s digital newspapers.

Budget Agreement Gets Attention from the Tea Party (Video)

The worst speaker of the House and Republican leader in the memory of living men. (PJ Media)

To say this deal is unliked is an understatement of biblical proportions.

This will be a short post today, I’ve a number of errands to do.

The topic today comes from this news item—Budget Negotiators look a Military Pensions. The democrats, looking to maintain and preserve their political allies, the Service Employees International Union, or SEIU, as it is better known, want to cut military pensions. Instead of trimming civilian personnel—union members, they plan to attack those who have placed their life in peril to defend this nation. I cannot describe how much this disgusts me.

Can savings from military pensions be part of the solution to avoid deeper cuts from defense next month?That’s an important question facing House-Senate negotiators as they try to close out a deal this week to avoid another round of sequestration in January and restore some certainty to the appropriations process for the remainder of this Congress.

The two sides appear close but Democrats are anxious about the level of savings being sought by Republicans from civilian federal workers. Finding some money on the military side of the equation could lessen this burden and make the package more equitable too from a political standpoint.

Indeed, the Pentagon has the greatest stake in some agreement and faces a further $21 billion cut in its 2014 budget if nothing is done. There is a greater recognition too –in Congress and among the Joint Chiefs— that it must come to terms with personnel-related costs, which are eating up more and more of what money remains.“Forty-four cents of every dollar we spend goes to military personnel,” said House Armed Services Committee Chairman Buck McKeon (R.-Calif.) “You look at Detroit, you look at General Motors, you look at what happens when you build up these costs, but we aren’t doing anything about it in our [defense] bill this year.”On the retirement front, President Barack Obama’s 2014 budget opened the door for the GOP by proposing to increase what federal employees contribute to their pensions: adjusting the number upward in three increments from .8 percent of pay to 2 percent.When this was last proposed, Congress instead decided to charge newly-hired workers even more. The administration proposal seeks to impose its earlier plan on those hired before 2013. The estimated savings are about $20 billion over the coming decade.

The article continues at the website. The column says that 44% of the Defense budget goes to military personnel. That slants the issue, that people, our active and retired troops are expense items, cost line items that can be manipulated to balance the DoDs budget. It’s easy to turn people—veterans, into numbers and ignore the OBLIGATION this nation has acquired to serve these people when they are no longer on active duty as they were prepared to serve us when they were on active duty.

Our veterans are NOT numbers to be juggled to preserve union jobs. They are obligations upon the nation to support them, through decent pensions and through medical, physical care and treatment through the VA. Instead, democrats hold them hostage to preserve their power base in SEIU and other public sector unions. That must end.