In 1938, after Germany invaded and incorporated Czechoslovakia into the German Reich, British Prime Minister Neville Chamberlain flew to Germany to make an agreement with Adolf Hitler to end Germany’s expansion in Europe. On his return to London, Chamberlain gave his famous speech saying he had gained, “peace for a time.” 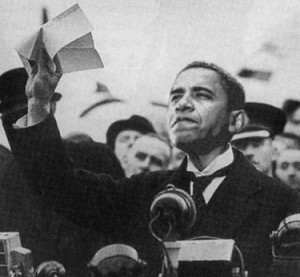 Over the weekend, Obama announced an agreement created by Sec’y of State John Kerry with Iran to “halt” their nuclear weapons program. Of course, the agreement has no teeth and leaves Israel swinging, alone, in the breeze. As a consequence, Saudia Arabia, fearing a nuclear Iran, is in the process of buying some nukes of their own from Pakistan. The Saudis have split with Washington over the justifiable fear that if attacked by Iran, the US would do nothing.

Yes, peace…for a time. A year after Neville Chamberlain made his famous speech, Britain was at war with Germany. The events of this last week leads me to wonder what the coming year will bring in the Middle East. Israel has never announced whether it has nuclear weapons, nor has Israel signed the Nuclear Non-Proliferation Treaty that would allow outside inspectors to see if Israel really had any. That aside, some sources estimate that Israel has approximately 90 nuclear weapons with enough material to manufacture 150-200 more on short notice.

Obamacare is heading back to SCOTUS again. This time for possible violations of the First Amendment. Obamacare requires individuals and corporations to buy and provide birth control for themselves and their employees regardless of religious opposition. Hobby Lobby has filed suit and that suit is going to the Supreme Court.

Supreme Court to decide whether to review ObamaCare contraception mandate

Amid the troubled rollout of the health law, and 17 months after the justices upheld it, the Obama administration is defending a provision that requires most employers that offer health insurance to their workers to provide a range of preventive health benefits, including contraception.

Roughly 40 for-profit companies have sued, arguing they should not be forced to cover some or all forms of birth control because doing so would violate their religious beliefs.

Both sides want the justices to settle an issue that has divided lower courts. The high court could announce its decision whether to take up the topic as early as Tuesday, following its closed-door meeting.

Arguments probably would take place in late March with a decision expected in late June.

The key issue is whether profit-making corporations can assert religious beliefs under the 1993 Religious Freedom Restoration Act. Nearly four years ago, the justices expanded the concept of corporate “personhood,” saying in the Citizens United case that corporations have the right to participate in the political process the same way that individuals do.

The administration wants the court to hear its appeal of the Denver-based federal appeals court ruling in favor of Hobby Lobby, an Oklahoma City-based arts and crafts chain that calls itself a “biblically founded business” and is closed on Sundays. Founded in 1972, the company now operates more than 500 stores in 41 states and employs more than 13,000 full-time employees who are eligible for health insurance. The Green family, Hobby Lobby’s owners, also owns the Mardel Christian bookstore chain.

The 10th U.S. Circuit Court of Appeals said corporations can be protected by the 1993 law in the same manner as individuals, and “that the contraceptive-coverage requirement substantially burdens Hobby Lobby and Mardel’s rights under” the law.

In its Supreme Court brief, the administration said the appeals court ruling was wrong and, if allowed to stand would make the law “a sword used to deny employees of for-profit commercial enterprises the benefits and protections of generally applicable laws.”

In two other cases, courts ruled for the administration. Conestoga Wood Specialties Corp., a Pennsylvania company that employs 950 people in making wood cabinets, is owned by a Mennonite family. Autocam Corp. is a Michigan-based maker of auto parts and medical devices that employs more than 650 people in the U.S.

The companies that have sued over the mandate have objections to different forms of birth control. Conestoga Wood objects to the coverage of Plan B and Ella, two emergency contraceptives that work mostly by preventing ovulation. The FDA says on its website that Plan B  “may also work by preventing fertilization of an egg … or by preventing attachment (implantation) to the womb (uterus),” while Ella also may work by changing of the lining of the uterus so as to prevent implantation.

Hobby Lobby objects to those two forms of contraception as well as two types of intrauterine devices (IUDs). Its owners say they believe life begins at conception, and they oppose only birth control methods that can prevent implantation of a fertilized egg in the uterus, but not other forms of contraception.

Autocam doesn’t want to pay for any contraception for its employees because of its owners’ Roman Catholic beliefs.

The article continues at the website. You can read it here.

Thanksgiving is just around the corner. I wish you all have a great Holiday.