California has a history matched by few states. It has a history of dealing justice when the “official” law enforcement organs can’t or won’t meet their obligations. The Vigilantes of San Francisco first appeared in 1851 and a few years later in 1856.

The San Francisco Committee of Vigilance was a popular ad hoc organization formed in 1851 and revived in 1856 in response to rampant crime and corruption in the municipal government of San Francisco, California. It was one of the most successful organizations in the vigilante tradition of the American Old West.

Now, move forward 157 years. The Vigilantes have returned for the same reasons, unconstrained criminality and the refusal of law enforcement to perform their function. 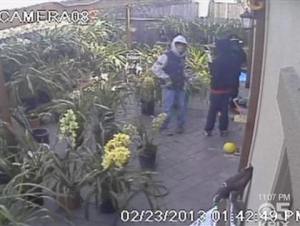 OAKLAND (KPIX 5) – Oakland’s crime problems have gotten so bad that some people aren’t even bothering to call the cops anymore; instead, they’re trying to solve and prevent crimes themselves.

KPIX 5 cameras caught up with a half dozen neighbors in East Oakland’s Arcadia Park neighborhood Monday as they walked the streets on the lookout for crime. The vigilance has never seemed more necessary than now; 25 homes in the neighborhood have been burglarized over the last two months alone.

In a neighborhood that has started to feel like the wild west, people have even started posting “wanted” signs.

“You have to walk around in your house with a gun to feel safe here,” said Alaska Tarvins of the Arcadia Park Board of Directors.

Over the weekend, one home was burglarized twice in a 24 hour period, once while a resident’s nephew was inside.

“He was on with 911 when those men tried to kick into his room. That was very frightening,” said the woman, identified only as Inca.

Now, Arcadia park neighbors are taking the detective work into their own hands.

KPIX 5 found a woman who identified herself as L.E. patrolling her neighborhood by car. She said she recently chased down a couple of robbers herself.

“There was an armed robbery in progress and the owner yelled ‘help me’ and I ended up going after them,” L.E. recalled.

The people who live in the area are nothing if not gutsy, but they need help. A plan to gate their community has been stalled. With the police force stretched painfully thin, they may be forced to follow other Oakland neighborhoods and hire private guards.

“We don’t have a choice. Either die or we hire some security ourselves, because we can’t depend on the police department,” said Tarvins.

Remember the adage loved by 2nd Amendment supporters, “When seconds count, the cops are minutes away.” In Oakland, they just don’t come at all.

Some lefties like to boast that California leads the nation. I surely hope not. I don’t want anarchy to come to Missouri like it is, increasingly, in California. Decades of overspending, higher unsupported debt, massive influx of unrestrained illegal immigration and infiltration of gangs and the drug cartels, all the failed and frankly unworkable liberal policies are coming home.

The cities in California pay their elected officials multi-hundreds of dollars salary all while cutting the budgets of their police and fire departments. This is leading to some innovative solutions by Californians—by individuals, not the municipalities. The article below leads with events in New Jersey and continues with similar activities in California.

Roles once held by police are now becoming commonplace for private detectives and security firms.

CAMDEN, N.J. — In an office in a sleepy town in southern New Jersey, Harry Glemser’s phone rang. With no buxom secretary to take a message, he answered it himself.

It was a dame, looking to hire a private eye.

But this was no scene from a noir novel. The woman was calling because someone in a car kept lurking in her driveway, the engine running, when her husband wasn’t home. She’d called the police, but they couldn’t help. She hoped Glemser could.

Detectives like Glemser across cash-strapped states have been getting more calls like these as cities and towns cut their police forces to contend with deep budget cuts. New Jersey alone lost 4,200 officers from 2008 to 2011, according to the Policemen’s Benevolent Assn., which tracks the state’s most recent data. As police focus more on responding to crime rather than preventing it, private detectives and security firms are often taking on the roles that police once did, investigating robberies, checking out alibis, looking into threats.

“The public is frustrated by the police,” said Glemser, a retired cop of 63 whose gold chains, white hair and bulky body might make a stranger worry he’s on the wrong side of the law. “The citizenry is quick to say that the police don’t do anything for them. They should be saying the police can’t do anything for them because of this budgetary issue, this manpower problem, this directive we have that came down from the chief.”

In California, where many cash-strapped cities cut police budgets during the recession, residents are turning to detectives, security firms and even the Internet.

After police cuts in Oakland, resident Dabney Lawless encouraged 400 neighbors to sign up on a website so they could send alerts to one another when they noticed suspicious people around; she also pays extra to an alarm company to drive through the neighborhood. Ron Cancio, the manager of a Stockton security firm, said that since the city’s budget battles, residents often have called his firm for minor complaints, because they know he’ll respond more quickly than the police.

Roger Arrella, the owner of TSInvestigations in Corona, said he’s getting a lot more calls from people who say police won’t help them in investigating burglaries, suspicious suicides or identity theft. But once they hear his rates, which are around $150 an hour, they usually balk.

“We get the phone calls — people are upset that someone broke into their house, or stole their car, and the police aren’t doing what they should be doing,” he said. “But then you tell them the price, and they say, well, maybe it’s not worth it to me.”

It’s another facet of how income inequality is playing out in America — as cities are forced to cut their budgets, even police protection is more accessible to those with cash.

“Wealthy neighborhoods are buying themselves more police protection than poor neighborhoods,” said Samuel Walker, emeritus professor of criminal justice at the University of Nebraska at Omaha and the author of 13 books on policing.

Those who can afford it use private police—retired officers, detectives and security firms. Those who cannot afford that price are left with themselves to prevent crimes…and dispense justice. We call them Vigilantes.

We, here in Cass County, are fortunate to have a Sheriff who understands duty and commitment. It’s too bad, Californian elected officials aren’t like him.

Welcome to the Progressives’ world.