Mrs. Crucis is like a kid waiting for Christmas. She’s finally gotten our cats interested in playing with some toys. We bought a laser toy recently. Our tiger-striped tabby, Amber, reacted when Mrs. Crucis shined the laser on her paws. Our big black cat, Snowflake, just yawned.

Both, finally got into the game batting at a string off a short pole. We’ve had these cats for eight years and it’s only recently they’ve been interested in toys. Mrs. Crucis has been watching “Cats from Hell” on Animal Planet and has obviously learned something.

She saw some cat toy on TV and ordered it. She’s be not-so-patiently waiting for it to arrive. We received a shipping notice earlier this week and since has been waiting, on pins ‘n needles, for the mailman to arrive.

Just like a little kid. I’m not sure which is funnier, the cats or her.

We’re beginning to see Holder’s next step in the Zimmerman persecution. Holder issued orders to the Sanford, FL police to retain custody of Zimmerman’s pistol pending a federal investigation.  The FBI has already investigated and found nothing to pursue.

Justice Department places ‘hold’ on Trayvon Martin trial evidence, including George Zimmerman’s gun – which Florida law says must be returned to him

The U.S. Department of Justice, overseen by Attorney General Eric Holder, has ordered the Sanford, Florida police department to keep possession of all the evidence from George Zimmerman’s second-degree murder trial – including the exonerated neighborhood watch volunteer’s gun.

Sanford police confirmed on Thursday that the DOJ asked the agency not to return any pieces of evidence to their owners. Zimmerman was expected to get his firearm back by month’s end.

Want to bet Holder won’t trump up some charge? I don’t.

If Zimmerman attempts to buy a replacement pistol, I’ll bet the NICS check will flag him. There’s no legal reason for that to happen but I’m sure it will. So what do we have to fight this type of state tyranny? Private sales.

Now you know why the libs demand all firearm sales pass through a FFL—to keep their enemies defenseless.

DENVER—Colorado Gov. John Hickenlooper set Sept. 10 as the date for the state’s first-ever legislative recall election Thursday after a judge rejected a lawsuit aimed at stopping the recalls of two Democratic state legislators.

“I’m really, really happy, obviously,” said Victor Head, president of Pueblo Freedom and Rights, which organized the Giron recall. “He ruled with the people instead of with the lawyers and the bureaucrats.”

Citizens’ groups began circulating petitions in April to recall the two lawmakers in reaction to their votes in favor of three gun-control bills, which took effect July 1. A petition drive to repeal the bill restricting ammunition-magazine capacity is also underway.

Yes, what goes around, comes around. Actions have consequences. It’s time the libs learn the consequences of their actions.

It’s not really news, now. It’s been plastered all over the news, cable outlets and the internet for several days—Detroit is bankrupt!

Detroit has become the largest city in US history to file for bankruptcy, owing 100,000 creditors $18.5 billion.

The city of Detroit filed for bankruptcty on Thursday afternoon, ending weeks of speculation about a possible such move.

Kevyn Orr, the city’s emergency manager, handed over a 3,000 page document detailing all the money which the city is unable to pay.

The list of those owed includes the names of all of the city’s active employees and its retirees, a list of properties that have tax claims with the city, numerous bondholders, business creditors and companies that insured Detroit debt.

The largest creditor is the city’s general pension scheme, which is owed $2 billion.

We knew the city was bankrupt. We’ve known it for years. Detroit is and has been financially and morally bankrupt for years, decades, really. A large city government, led and controlled by libs, socialists and democrats, has been run into the ground. The residents has been leaving in droves. The population is half what it was in 1950. Vast swatches of the city is empty and the houses, falling into deep disrepair, are being razed.

And the unions are still fighting, in the courts, the inevitable result—bankruptcy. Why? Because they have been bleeding the city’s finances for decades. If the city really is placed in bankruptcy, the money stream will be cut off. Detroit is nearly $20 Billion (yes, that is Billion with a B!) in debt. A significant portion of that is to the union pension funds. Now the unions with have to fund the pension funds themselves using money that had been used for political purposes as well as lining the union leaders’ pockets.

City leaders are already calling for Obama to bail them out.

Finally, this blurb from the Heritage Foundation concerning Benjamin Franklin. The libs belittle Franklin at every opportunity. They claim he’s one of the countries first atheists. An incorrect fact. He was a Deist.

Benjamin Franklin: The Sage of America

There was a time, not too long ago, when every schoolchild in America learned about Benjamin Franklin and his exploits; a great many read his brief Autobiography. Unfortunately, that time has passed. None of the American Founders is the icon he once was, of course, but in the case of Franklin, this is especially lamentable because Franklin addressed himself more to the common man, and to the young, than did his colleagues. He directed his writing largely to the formation of popular character and had a very salutary effect on that character for as long as he was widely read.

Born in Boston in 1706, Franklin was older by a generation than most of his fellow Founders. The youngest son of youngest sons for five generations back, as he tells us with pride, Franklin necessarily made his own way in the world. He tried several trades before settling on printing, the one mechanical trade that suited his bookish and searching mind.

While still very young, he read books of “polemic Divinity,” mostly attacks on Deism that he found in his father’s library. These books had an effect “quite contrary to what was intended by them,” Franklin tells us, and he became “a thorough Deist” by the time he was 15.[1] His unconventional religious beliefs, together with his fondness for disputing with his fellow Bostonians, contributed to his eventual need to depart for Philadelphia.

When only 16 and a printing apprentice to his brother James, he penned a series of essays under the pseudonym Silence Dogood, devoted to chiding the faults and encouraging the virtues of his fellow Bostonians. It was a device he returned to again and again. In Philadelphia, he wrote as the Busy-Body, a self-proclaimed censor morum, and at other times as Alice Addertongue, Obadiah Plainman, Homespun, and of course Poor Richard, whose sententious proverbs (many gleaned from other sources) remain part of our heritage. Franklin considered newspapers (as well as almanacs) to be “another Means of communicating Instruction”[2] to the wider public and filled his out with small, edifying pieces. It was part of a larger educational project, to which his Autobiography also belongs.

Franklin’s curiosity extended not only to politics, morality, and theology, but also to science. He investigated natural phenomena from weather patterns to the Gulf Stream to electricity. He founded the American Philosophical Society to advance the cause of science in the New World. His research in electricity led to the discovery of the polarity of electrical current; his invention of the lightning rod and many other advances brought him international renown. He was admitted to the Royal Society of London and other European learned societies. Franklin was the only one of the Founders with an international reputation before independence, and that reputation was scientific.

I invite you to read the entire article. Have your children read it, too. They’ll learn much about our Founding Fathers and Franklin that I doubt is being taught in their schools.

Waaaay back in the 1950s when I was in grade school, Saturday morning was for kids. By that I mean cartoons and kid shows starting a 6am through noon. TV was black and white then and the old cartoons from the 30s and 40s were new to us. Cartoons like Krazy Kat, Mickey Mouse, Popeye and the Katzenjammer Kids.

We laughed when Krazy Kat threw a brick at the cop, Popeye and Bluto fighting, and all the stuff the Kids got into.  So did our parents.  Dad liked Popeye, Mom liked the Katzenjammer Kids.  We all liked them and no one thought we kids would throw bricks at people like Krazy Kat nor start fights like Popeye and Bluto.  We knew it was fiction—cartoons and not real life.

I guess that overall folks must have been smarter then…and knew their kids better too.  After all, we routinely took our .22 rifles to school in the Fall and went squirrel hunting on the way home in the afternoon.  No one thought we’d shoot each other or someone else.  Our parents taught us gun safety and how to handle our rifles safely.

It’s been nearly sixty years since that time.  I still like cartoons but my taste has changed a bit.  Here are a few that I found today that I think is more appropriate for our times.  Hmmm, on second thought, maybe metaphorically throwing bricks like Krazy Kat will come in fashion once again if the libs get out of control. 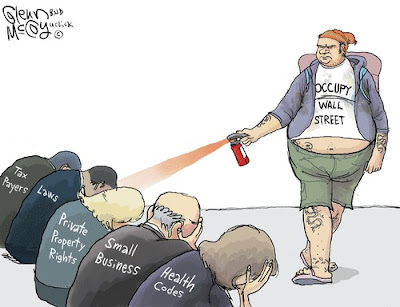 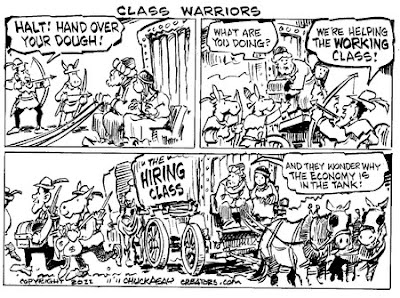 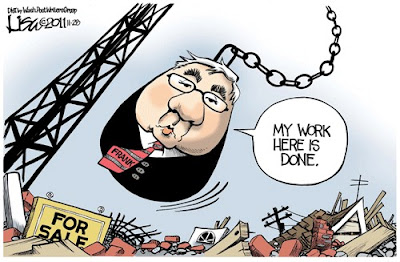 Here’s another view of Barney Frank’s departure by Michael Ramirez. 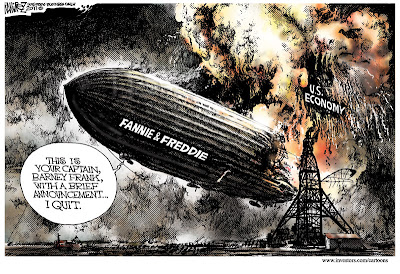 As I wrote yesterday, we’re expecting a crew at any time to begin tearing off the sides of our house and erecting new siding.  Consequently, I’m keeping my post short and simple. I may have to bail at any time.

Oh, did I say they’re repairing our windows too?  It’s gonna get a bit chilly in Casa Crucis. Time to emulate the cats and break out the fur coats.