For all too many, that’s the sentiment today. Moreso, because it’s also Tax Day where we pony up our gelt to the state and FedGov. Mrs. Crucis and I completed that onerous task last month.

As expected, the internet is filled today with articles about taxes—too many, too much, too little return for our money. If we fail to pay, we can expect a visit by federal leg-breakers. The FedGov’s tactics would make the local loan shark blanch.

An article in the American Thinker, expounds on the concept of taxes being the cost of civilization.

The Rising Price of Civilization

Supreme Court Justice Oliver Wendell Holmes famously opined: “Taxes are the price we pay for civilization.” Right, but that price is rapidly rising. Might we be paying for more “civilization” than we can afford?

I liked the article’s opening. The rest is just a rant about Missouri’s personal property tax. At one time, “paying the cost of civilization,” may have been accurate. No longer. Today, it seems to me, our taxes are paving our path towards tyranny and a dictatorship.

We see examples all over the country. New York, Colorado and Connecticut have repealed the 2nd Amendment within their states. They ignore McDonald, that declared the U.S. 2nd Amendment applies to the states. The New York law goes into effect today and that state’s Rifle and Pistol Association has filed a lawsuit against Cuomo’s power grab.

In our state of Missouri, our Governor, Jay Nixon, and a number of his department heads have violated state law and subverted the intent of those laws to send private data of the state’s citizens to the FedGov. In particular, Nixon, the Department of Revenue and the State Highway Patrol gave to the IRS a list of Missouri residents who hold CCW permits.

The reason? The IRS wanted to compare those lists with people who receive SSI payments for disability, possibly, mental disability. That would enable them to seize any weapons and ammunition, and possibly jail anyone who appears on both lists.

In addition to all the above, Colorado is back in the news today. Not only has the state violated the 2nd Amendment, they are now proposing to institutionalize vote fraud.

COLORADO SPRINGS, Colo., April 14, 2013 — Under the guise of modernizing the elections processes and increasing voter turnout, Democrats have submitted a bill that will leave the state wide open to fraud. House Bill 1303 was written completely in secret by House Democrats — no surprise in this increasingly radical one-party state government — without the input of the Secretary of State’s office or any of the 64 county clerk and recorder offices who oversee elections.

The bill is 126 pages long and completely re-writes election law in Colorado, creating a permanent system of fraudulent elections.

Just as with House Bill 10-0917 exactly three years ago, this bill introduces same-day voter registration and all mail-in ballot elections. But there is much more.

Sponsors of the bill claim that both methods increase voter participation. In fact, it is a recipe for fraud and creates problems where there are none now.

If this bill becomes law, prosecution will be even less likely. In one very telling portion of the bill, vote fraud is reduced from a crime to a misdemeanor. The word crime is boldly crossed out:

“IT IS A CRIME CLASS 1 MISDEMEANOR”

The intention is pretty clear from that change alone. But there is yet more.

The bill eliminates the category of “inactive voter,” requiring mail ballots to be sent to addresses that have not participated in the voting process in several years. These ballots can be fraudulently returned, causing serious issues of ballot verification.

The residency requirement is reduced from 30 days to 22. A subtle change in the voter’s affidavit is from “I am a resident of the state of Colorado” to “I have been a resident…”

So if you’ve ever lived in Colorado for twenty-two days, come on back and vote!

It seems that every day, the dems/libs make another move to institutionalize their power over us. At some point, we will rebell. I thought that day would be years off. Now, I’m not so sure.

Elections, and actions, have consequences. Missouri is suffering under those consequences as more and more revelations are uncovered about the illegal release of confidential information to the FedGov—in particular, to the DHS and the IRS.

The first case of individual data being illegally collected was disclosed when the Department of Revenue, through their licensing bureau, refused to issue a CCW permit. The DoR has been collecting and scanning private documents and forwarding that information out of state in violation of Missouri law.

One CCW applicant refused to submit the requested documents. The Dor refused to issue the permit—although the DoR has no legal authority to refuse a permit once it has been approved by the county’s Sheriff! That applicant sued the DoR and a Judge issued the Injuction prohibiting the DoR from collecting any further data pending the resolution of the suit.

Jay Nixon initially denied the accusations. However, later, in testimony before the state legislature, the DoR confirmed they did collect private information as they have been accused. A Missouri Judge granted an injunction to block the DoR from collecting private data from Missouri’s citizens.

Today, new allegations broke about illegal actions by the Nixon administration. By Missouri law, personal information of the state’s CCW holders is confidential. That data is held by the DoR and can only be released for criminal investigations—individual information. The Missouri Highway Patrol admitted this week it had requested the complete CCW database from the DoR, twice, and had sent that information to the IRS. Again, in violation of Missouri law.

Questioning in the Senate Appropriations Committee revealed that on two occasions, in November 2011 and again in January, the patrol asked for and received the full list from the state Division of Motor Vehicle and Driver Licensing. Schaefer later met in his office with Col. Ron Replogle, superintendent of the patrol.

After the meeting, he said Replogle had given him sketchy details about turning over the list, enough to raise many more questions. Testimony from Department of Revenue officials revealed that the list of 185,000 names had been put online in one instance and given to the patrol on a disc in January.

Schaefer has been investigating a new driver licensing system. He and the committee grilled the revenue officials for several hours in the morning and again at midday before they admitted the list had been copied. The investigation was triggered by fears that concealed weapons data was being shared with federal authorities.

The list was given to the Social Security Administration Office of Inspector General, Schaefer said he was told.

“Apparently from what I understand, they wanted to match up anyone who had a mental diagnosis or disability with also having a concealed carry license,” Schaefer said. “What I am told is there is no written request for that information.”

Chris Koster, Missouri’s Attorney General, whose office is administratively under the Governor, has not, so far, investigated these violations of state law despite numerous request for him to do so.

What has all this to do with today’s post title? It’s the fact that Jax Nixon and Chris Koster was re-elected to office by a large margin last November. Does anyone truly believe if either, or both of them had lost that election, that the heads of the DoR, the DMV and the Highway Patrol would still be in office? If Ed Martin had beaten Koster last November, I guarantee that all three agency heads would be under investigation. If Nixon had lost his election, all three agency heads would be under suspension pending the results of that investigation.

But—neither lost and now we have a massive cover-up by Nixon’s department heads. Those are the consequences of that election. The voter’s action in that election has lead directly to this situation. Yes, elections have consequences.

Like Loading...
Facebook
The Missouri state legislature passed a bill last summer to allow Missouri residents to choose a Don’t Tread on Me specialty license plate.  The original date to begin ordering this, along with several other new specialty plates, was last August. Until this last week the Department of Revenue (DoR) has dragged their feet.
Finally the Missouri Department of Revenue released the process to order the plates.   This is approximately what we expected to see.

What we have received from the MO Department of Revenue is this. 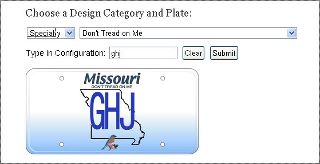 To say that the Department of Revenue has not met our expectations is an extreme understatement.  What the DoR appears to have done is taken the MO standard license plate, removed the Show Me State motto and replaced the motto with Don’t Tread on Me (DTOM).

This is not acceptable.

This is nothing more than a political gambit from a democrat administration who didn’t want this plate in the first place. Governor Nixon allowed passage of this bill under extreme pressure.  Now it appears he’s expressing his displeasure through the DoR. His administration is not following the spirit nor perhaps the letter of the bill. The DoR is using every impediment to insure our expectations are not met.

There were and continue to be a number of individuals including a number of Missouri legislators involved in the passage of the original bill that created the DTOM plate. I and others have been in communication with them.  This saga is NOT over.