Jimmy Hoffa, Jr., declared, on Labor Day, war on the GOP.  “Take them out!” he declared.  Union goons have already attacked Tea Party participants.  In St. Louis it was SEIU goons.  Hoffa was giving orders to the Teamsters.  In full disclosure, I was once a Teamster member.  I lasted about two months before being fed up and getting out.

But times have changed.  This isn’t the ’50s, ’60s, nor even the ’70s and ’80s.  This is the 21st Century.  In the last century, government kept people defenseless.  That’s not true today.  There is only one state that keeps it’s subjects disarmed—Illinois.  There is a large movement, through the courts and the legislature, to remove that restriction.

People now can legally arm themselves. Most states now have some form of legal concealed carry. That means people can defend themselves from attack by criminals…or union goons.

If the libs and unions attempt to carry out their threats, they just might be surprised.  I’ve been to a number of Tea Party rallies.  I know what to look for.  At one large KC rally, I stopped counting after fifty of the number of armed attendees.

Glenn McCoy has an appropriate cartoon up today.  I would strongly suggest the unions do not go there.  The times have changed. 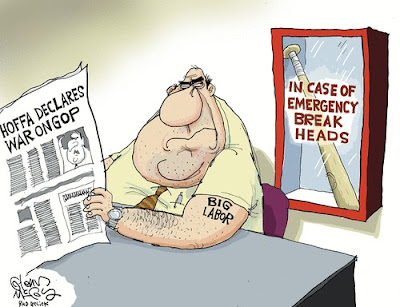