There was a movie a couple of years ago called, The Perfect Storm. A number of weather events converged to create a monster storm in the Atlantic. It’s beginning to appear as if a Perfect Storm is building in Washington, DC.

There are three scandals coming to light in Washington—four, if you include the Kermit Barron Gosnell trial in Philadelphia. First is the Benghazi investigation. We now know that not only were the Marine guards reduced during Hilliary’s term as SecState, that warnings of the attack were received in advance, that security forces were stood down from the beginning of the attack and the WH and the State Department tried to blame a You Tube video that was uploaded months previously and that had very few viewings.

The second is the IRS’ attempted intimidation by audit of the tax-exempt status conservative and Jewish groups supporting Israel and of those similar groups applying for tax-exempt status. We now know this affront was started in the IRS HQ in Washington, not solely in the Cincinnati field office as initially claimed. In fact that Cincinnati office isn’t a field office at all. It is the prime office governing Tax-exempt applications and audits of those tax-exempt organizations. This scandal continues to grow as more evidence is being uncovered that shows the audits of conservative and Jewish groups was much wider than initially thought.

The third scandal that has just appeared is the DoJ’s “investigation” of reporters of the Associated Press. The DoJ wiretapped 20 lines in the AP’s Washington office and seized telephone records of hundreds of reporters. The DoJ has refused to explain their actions. So much for Obama’s administration for the 1st Amendment and freedom of the press.

The pressure on Obama is mounting and the stress is showing. He’s acting more and more erratic. In a fundraiser at Harvey Weinstein’s home with Justin Timberlake and Jessica Biel, he blamed Rush Limbaugh as the reason why ‘Pubs won’t cooperate with him and give him a rubber stamp to do whatever he wants. It’s like a child having a hissy-fit when that child doesn’t get what he wants. It is reminiscent of Nixon wandering the halls of the White House during his last days, conversing with the ghosts of past presidents and crying in the arms of Henry Kissinger.

However, Nixon was, by heritage, a Quaker. Obama’s heritage is that of a socialist, a Marxist.  Nixon, under pressure, reverted to his heritage. He sought forgiveness and redemption, an inculcation of his Quaker heritage that lead to his resignation.

We don’t know what Obama will do under pressure, but we can assume he won’t resign like Nixon. No, I would expect Obama to be more like Hitler, hiding to the last in a bunker as events sweep toward him, lashing out against his foes to the end.

In the mean time, we live under that old Chinese curse: “to live in interesting times.” Personally, I’d rather it’d not be quite so interesting. However, that option was taken from us with Obama’s reelection.

Our amateur president has been busy this week selling out our country.  First, he attempted to take credit for throwing Gadaffi (or however his name is spelled) out of Libya.  Then when the Islamists magically appeared to take over, he praised them and their “democratic” reforms. 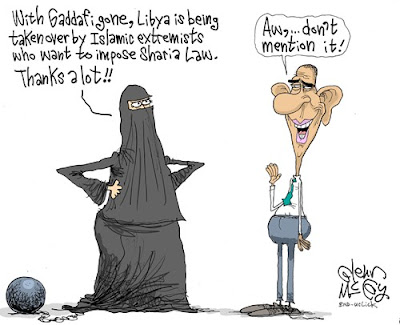 In order to hide the amount of US activity in the Libyan civil war, Obama claimed it was a NATO effort.  Well, just which NATO member had the capability to perform all that air and ground support?  It wasn’t the Euros.  The UK had to borrow some Maritime surveillance aircraft from the US Navy to provide radar coverage to the RN’s flotilla in the Med. The Brits had scrapped their Maritime aircraft years earlier.  After all, the US Navy had plenty.

So it was all a NATO affair.  Until it was time to claim credit. 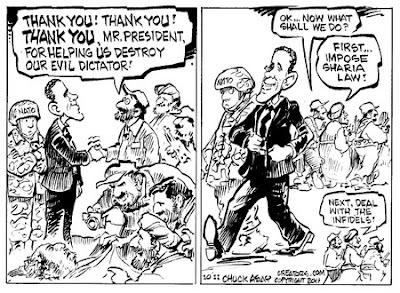 Then we come to the second great act of incompetency this week.  The negotiations with Iraq have been stalled because of an impasse in the SOFA agreement (Status of Forces Agreement).  The US wanted immunity for their troops for performing their usual duty and for any acts committed while doing those duties.  It didn’t give them immunity for criminal acts, but was to define what those acts would be.

Iraq knew that Obama was weak.  All they had to do was to remain stubborn and Obama would fold…which he did.

Now Iraq will be defenseless against Iran and will have no support from the US unless they come, hat-in-hand, and beg for it.  Does anyone think that will happen until it’s too late?

No.  This is the situation that Iran has been dreaming about.

So, for nine, nearly ten years we’ve spilled our blood, spent our treasure only to throw it all away because of the gross ineptitude in the White House.

It doesn’t take a military genius to be able to predict that we’ll be back, either in Iraq, Iran, or perhaps both, within ten years.

And again, like after Gulf War I and II, Gulf War III is coming and we’ll have to do it all over again to retrieve what the democrats gave away.

Like Loading...
Obama said the US is doing little in the Euro War against Gadaffi.  Liar.  Take a look at this graphic to see who is more involved, the US or the Euros. 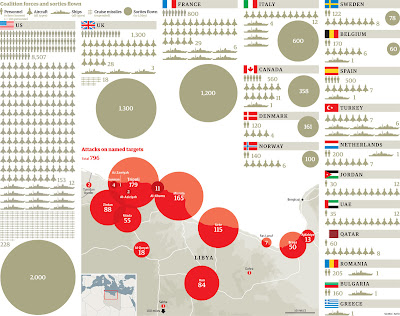 Click on the image to see it in its original size.  Then compare the number of Men, Ships and Aircraft involved and the number of sorties flown and cruise missiles expended.  Like I said, Obama is a liar.