I don’t have a central theme for this morning’s post. I was checking my usual sources and came across this article. We now know the cause of the increasing number of democrats. The average intelligence level is dropping!

Would you be surprised to hear that the human race is slowly becoming dumber, and dumber? Despite our advancements over the last tens or even hundreds of years, some ‘experts’ believe that humans are losing cognitive capabilities and becoming more emotionally unstable. One Stanford University researcher and geneticist, Dr. Gerald Crabtree, believes that our intellectual decline as a race has much to do with adverse genetic mutations. But there is more to it than that.

According to Crabtree, our cognitive and emotional capabilities are fueled and determined by the combined effort of thousands of genes. If a mutation occurred in any of of these genes, which is quite likely, then intelligence or emotional stability can be negatively impacted.

“I would wager that if an average citizen from Athens of 1000 BC were to appear suddenly among us, he or she would be among the brightest and most intellectually alive of our colleagues and companions, with a good memory, a broad range of ideas, and a clear-sighted view of important issues. Furthermore, I would guess that he or she would be among the most emotionally stable of our friends and colleagues,” the geneticist began his article in the scientific journal Trends in Genetics.

My first degree was in Clinical Psychology.  One of my professors in Child Development had the opinion that most of our intellectual prowess was directly proportional to quality and quantity of teaching and challenging children at an early age and throughout childhood into adulthood. Note: he said prowess, not capacity. According to him, intellectual capacity was largely determined by genetics. Intellectual prowess, how well you used your intellect, was determined by training, education and most importantly, culture.  He had plenty of studies to support his views. From what I’ve observed in the forty-plus years since, I agree with him.

In past centuries, those with greater intellectual prowess had a greater probability of passing along their genes. Unfortunately, that isn’t the case, today.

Our next Spot Shot could be filed under the label, “Well, Duh!”  From Rasmussen…

Only 11% Say Congress is Good Reflection of Americans’ Views

Despite a deeply held belief in Washington that Congress reflects the views of the people, most Americans don’t share that sentiment.

That poll, according to Rasmussen, has a sampling error rate of ±3%. Rasmussen is one of a few full time polling agencies and is viewed by many, including me, as the most accurate.

Chuck Hagel is still the nominee for SecDef. He truly is unfit for the office but the nomination proceedings isn’t about fitness, it’s all about politics. For a few days, it appeared that Harry Reid was going to throw in the towel. Then he looked again and found that the blocking filibuster was in John McCain’s hands. That gave Reid the confidence to continue pushing Hagel.

Members of the Senate have left Washington for the President’s Day break, scheduled to return February 25.  That means Republicans who voted to filibuster the nomination of Chuck Hagel to be Defense Secretary have ten days to search for new evidence against him and lobby colleagues to keep up the opposition.

With 41 votes needed to uphold a filibuster — exactly the number Republicans mustered against Hagel on Thursday — the GOP has no votes to lose.  And the most critical of those votes appears to belong to Sen. John McCain.

“McCain is the one to watch on this,” says one senior Republican Senate aide.  “He seems wiling to vote for cloture on the grounds that cloture should be invoked on cabinet-level nominees.”

What the aide meant is that McCain supported the Republican filibuster Thursday not because he believes Hagel should never receive an up-or-down vote but because McCain wanted to delay Hagel as a way to pressure the Obama administration to release more information on the deadly September 11, 2012 attack on the American consulate in Benghazi.

In fact, McCain has said clearly that he believes Hagel is entitled to a final vote, something that would surely result in Hagel’s confirmation, given overwhelming — so far unanimous — Democratic support. But at the same time, McCain joined the filibuster, at least for the moment, to squeeze more details about Benghazi out of the administration.

All Harry Reid has to do to get Hagel confirmed by the Senate is to throw McCain a bone. A bone that would give McCain more face time on TV. Yes, the Benghazi hearings are important but not so important that Hagel should be confirmed. The Benghazi hearing can continue without giving anything to Reid or the White House. If Hagel’s vote comes to the Senate floor, he will be confirmed. There are enough dem votes and maybe a few more from some RINO senators to confirm Hagel.

Of course, there’s nothing more important than McCain’s ego.

I’ve run out of queued posts and I’m drawing a blank for new post. I could do the obligatory “Cold” post because it’s certainly cold. The lows for the last few days have been in the negative regions (Fahrenheit). We got another several inches (5?) of snow overnight on top of all the previous deposits since Christmas Eve. Tonight, the lows be be in the negative double digits and the forecasted high “may” reach zero but will likely be negative as well. 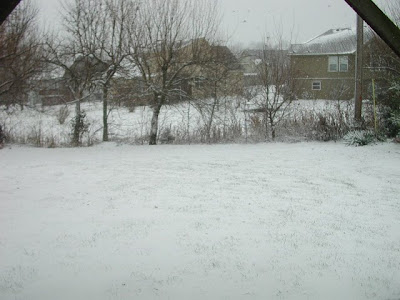 Compare that with this one taken this morning. Yes, I know it’s not like the deep snow the east coast received, but it’s much above normal for the KC area. See, the usual winter climate for us is cold, but not a lot of snow. The plains are dry and most of the snow from the Colorado mountains gets dumped on eastern Colorado, western Kansas and Nebraska. By the time it reaches KC, we only get an inch or two that is gone in a few days. Not this time. The snow is not melting other than for some surface evaporation on the few sunny days we’ve had. No, it’s just getting deeper and deeper. The photo below that I took this morning and the beginning of the Crucis glacier. As I measured with a yard stick, it’s about 13″ deep on the average just off my deck. I haven’t checked the driveway yet. 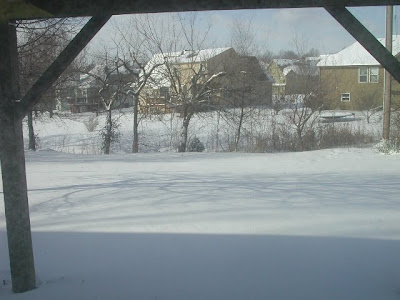 I think I’ll just go hibernate for a while.