One of the legislative bills that passed this session and is sitting on Jay Nixon’s desk, is a bill that would place a cap on the amount of revenue a city can collect from traffic fines. This has been a problem with some municipalities for decades, Ferguson, MO, being one.

Some cities anticipate Nixon’s signature. They have chosen a different path to collect revenues from their citizens. Instead of issuing a high number of traffic tickets, they issue tickets for a plenitude of other reasons…like allowing your grass to get too high, allowing toys to be scattered across your lawn, having a BBQ pit that doesn’t comply with city codes or is visible from the front of your house. In some cases, allowing your children to play outside the house unsupervised will lead to a yellow ticket on your front door.

Municipalities ticket for trees and toys, as traffic revenue declines 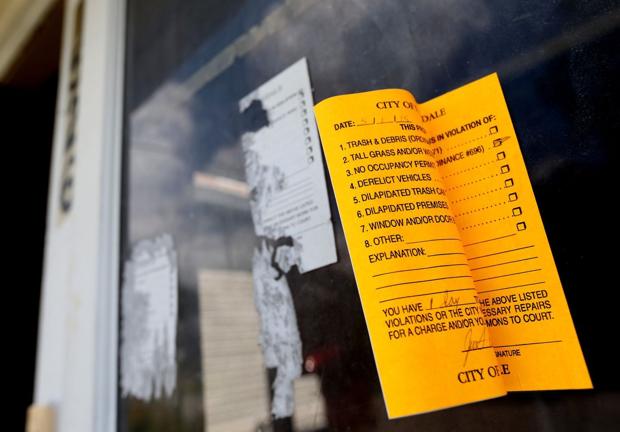 A ticket written by the city of Pagedale dated May 1, 2015 is pasted on the front door of home in the 1500 block of Engelholm Avenue on Thursday, May 21, 2015. The ticket cites the property for having high grass and gives the property owner one day to get it cut. Photo by David Carson, dcarson@post-dispatch.com

PAGEDALE • Drive through this working-class suburb filled with 1950s cottages and you will see many edged and weeded lawns. You’ll also notice orange sticky notes on the doors — at least one or two per street in many parts of town.

They are warnings the city gives to residents who violate local ordinances. And in this community of 3,304 residents, the list of what earns a ticket and fine is long.

Among the things that will be “closely monitored” through the spring and summer, according to a newsletter that recently went out to residents:

Pants worn too low or grass grown too high. Children riding bikes without helmets. Barbecue pits or toys in front yards. Basketball hoops in the streets.

There’s no loitering — described in city code as “the concept of spending time idly” or “the colloquial expression ‘hanging around.’” And, despite a citywide 20 mph speed limit, there’s no playing or walking in the street.

Pagedale handed out 2,255 citations for these types of offenses last year — or nearly two per household. That’s a nearly 500 percent increase from five years ago, according to an analysis of state court data by the Post-Dispatch.

And yet none of the fines and fees from these offenses count under the Macks Creek Law. The law is the state’s one tool for keeping cash-hungry municipalities from relying too much on court fines for revenue.

But it has a major blind spot: Its revenue limits apply only to traffic cases.

Cities and villages have no restrictions on raising revenue from other types of tickets.

In Pagedale, 40 percent of last year’s citations were from nontraffic matters, according to the newspaper’s analysis. More than half of tickets in Ferguson and four other communities were for nontraffic violations.

You can read the entire column on the Post-Dispatch’s website.

Not all of the petty tyrants live on the eastern side of the state. Sly James, Mayor of Kansas City, pushed a ban on open carry knowing full well the legislature would pass a measure allowing open carry in Missouri. One exception that Sly James and other petty tyrants in Missouri lobbied for and succeeded, was that only licensed CCW carriers could carry openly in cities and counties that had ordinances against it. Mayor James rammed his ordinance through the Kansas City Council before passage of the Open Carry bill for nothing more than pure spite.

Missouri’s pre-emption of these petty tyrannies is a continuing thorn in the side of liberals and statists across the state. The Columbia Daily Tribune, a well know democrat house organ, bemoaned the loss of ‘local control’, the pre-emption of the state over local ordinances that run contrary to state law.

By nature, when cities pass laws in conflict with the general statewide status quo, local rules are more progressive. Of late, state legislatures politically dominated by conservatives have passed laws prohibiting actions by cities disapproved of by business interests.

One might wonder why conservative state politicians would contradict their movement’s antipathy toward centralized control, but when conservatives live at the state level, they hold the reins. The U.S. Constitution says powers not specifically given to the federal government reside in the states, and cities are creatures of the state. Sen. Kurt Schaefer, running for Missouri attorney general, said city councils and mayors “don’t have some kind of organic legal authority to do whatever they want. It would be absolute bedlam what some of these communities would do to their citizens if they had that ability.”

Schaefer is right about constitutional law, but he might misread the sentiment regarding local citizen prerogatives. What if local citizens here and there would like to deviate from state dictum — by paying a higher minimum wage, for instance? Or banning plastic bags? Or … ? Schaefer & Co. justify their override in the name of statewide consistency, a powerful argument in some cases but not others. At the moment, state assumption of control is done mainly at the behest of influential business interests that don’t like certain city laws. They like their kind of uniformity.

Often state law should supersede, and with standards set by state legislatures. It makes sense for the state to have uniform gun ownership laws, for instance. In most of the other categories usurped by state lawmakers, a more open-minded debate at the local level would be reasonable – from the standpoint of political science, that is.

Apparently, Mr. Waters is fully satisfied with more regulation, more ordinances, more impositions on life and liberty, more nanny state oversight. Fortunately for the rest of us, we have conservatives in Jeff City who work to protect us from petty tyrants like Henry J. Watters, III and Sly James. If allowed, these two tyrants would no longer just be petty. No, they’d would grab and much power as they could. Petty, they would be not.