That is the question. What question? Whether Obama is a Muslim or not.

I’ve not written nor spoke about this issue before, although many others have and claimed Obama is a Muslim. Yes, he attended Jeremiah Wright’s church for twenty years. Many Christians also claim that Wright’s brand of theology is far removed from Christianity.

This week the issue came to the forefront initially by an interview of Rudy Giuliani when Giuliani said Obama did not love America. You can guess how that went over with the MSM. After the liberals and MSM drew their bloody knives, Giuliani, amid death threats, went one step further.

First of all, I’m not questioning his patriotism. He’s a patriot, I’m sure. What I’m saying is that in his rhetoric I very rarely hear him say the things that I used to hear Ronald Reagan say, the things I used to hear Bill Clinton say about how much he loves America. I do hear him criticize America much more often than other American presidents. And when it’s not in the context of overwhelming number of statements about the exceptionalism of America, it sounds like he’s more of a critic than he is a supporter. You can be a patriotic American and be a critic, but then you’re not expressing that kind of love that we’re used to from a president…

What I question about the president, maybe it’s even broader than that he doesn’t express love of America enough, which I don’t think he does. I think he talks more about criticism rather than about what an exceptional country we are. At least I don’t feel that form him. Maybe I’m missing something but I don’t feel that.I also don’t believe he expresses a love of Western civilization that he should or understanding of Western civilization or what Western civilization has brought to the world. It’s had its grave, grave faults, terrible sins, but it’s also gone through things like the Protestant Reformation, the Catholic Counter-Reformation. We have three different forms of Judaism; reformed, conservative, orthodox. They all live together, they don’t kill each other, they don’t stone each other. At one time they did, a long time ago.But now how about we talk about how we get Islam into the modern age where there is a recognition that you have to have this kind of debate within your religion and it’s got to come out in the open. It’s got to be discussed. If you refuse to say that there are extremist members of the Islamic religion, then it sounds like you’re living on Mars.

But Rudy Giuliani wasn’t finished. He’s no ‘shrinking violet.’ He has a reputation of pushing back when pushed. He continued on the offensive not only defending his earlier remarks but taking another step forward.

I’m right about this. I have no doubt about it. I do not withdraw my words. If the president goes and makes a speech and talks about what a great country this is, if the president could complete the following sentence, during the Crusades the Christians were barbarians and so were the Muslims, if the president could say Islamic fundamentalist terrorism is our enemy, I will applaud the president. But until he does that, I will have doubts about his emotions, his feelings, his attitudes and the way in which he developed. We haven’t even mentioned some of the other communists and leftists who educated him as a young man. But all we need is Reverend Wright. 17 years in that church and that man condemned America over and over and over again. And he remained a member of that church?

The MSM isn’t satisfied with trashing Giuliani. They attempted to ambush Wisconsin Governor Scott Walker when he attended the winter session of the National Governors Association. A reporter asked Walker if he thought Obama was a Christian.

Gov. Scott Walker: ‘I don’t know’ whether Obama is a Christian Wisconsin Gov. Scott Walker, a prospective Republican presidential contender, said Saturday he does not know whether President Obama is a Christian.

“I don’t know,” Walker said in an interview at the JW Marriott hotel in Washington, where he was attending the winter meeting of the National Governors Association.

“I’ve actually never talked about it or I haven’t read about that,” Walker said, his voice calm and firm. “I’ve never asked him that,” he added. “You’ve asked me to make statements about people that I haven’t had a conversation with about that. How [could] I say if I know either of you are a Christian?”

Walker said such questions from reporters are reflective of a broader problem in the nation’s political-media culture, which he described as fixated on issues that are not relevant to most Americans.“

To me, this is a classic example of why people hate Washington and, increasingly, they dislike the press,” he said. “The things they care about don’t even remotely come close to what you’re asking about.”

The MSM tried to ambush Scott Walker but failed. Walker neatly stepped out of the trap the reporter had laid for him. It was the MSM who changed the topic from Obama’s love or hatred of America to Obama’s religious views.

I had an opportunity to briefly meet Rudy Giuliani a few years ago. He and several others gave speeches about leadership. It was a seminar series that toured the country and my employer bought a block of tickets for their employees. I was one of those who attended. After all the speeches were over, we were conducted to a hospitality suite where Giuliani and others were present. I shook Rudy’s hand and we spoke a few sentences. I doubt if Giuliani remembers. I remember his openness and honesty. I don’t agree with all of Giuliani’s politics. He’s more ‘moderate’ than me, but I never doubted his sincerity nor his courage

The conversation since Giuliani’s first statement has shifted from Obama’s love of America to Obama’s religion. Many believe Obama is a Muslim. I’ve not gotten into those discussions before. I believe a person’s acts speak louder than words.

But the question is now being asked at the national level. It’s no longer a topic for the Tin-Foil Hat crowd. The MSM has, unintentionally perhaps, raised the question, “Is Obama a Muslim?” If I must, as I said above, judge a person by his actions, then the answer must be, “Yes, he is.” 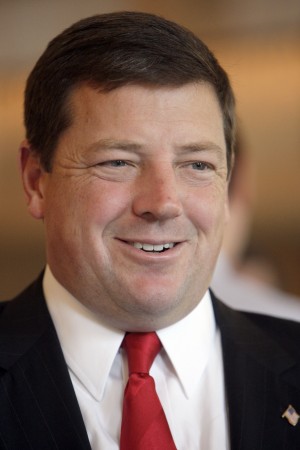 Missouri GOP Chairman Ed Martin announced his resignation yesterday. Rumors had been floating around some some weeks before the announcement. Martin is leaving to become President of Phyllis Schlafly’s Eagle Forum.

The announcement did surprise many. Today, we’re hearing some news who may replace Martin. Some are well-known conservatives. Others, such as the protégé of Ron Richard, aren’t.

Yesterday Ed Martin announced he was not running for re-election for the Chair of the Missouri Republican Party, instead taking a position with The Eagle Forum.

When I heard that, I only knew of one person who was in the hunt: John Hancock.

After I posted Martin’s press release, I had someone reach out and say, “Did you hear that someone else may jump in?”

I hadn’t, but today I have a name: Eddy Justice.

Justice has shown interest in leading the Missouri GOP, but didn’t want to challenge Martin. He said he didn’t have any problem replacing him though.

Finally, a name I’m hearing as being possibly recruited for the position is Nick Myers, Newton County GOP Committee Chairman. Myers is a good friend of Sen. Ron Richards, and a power player in southwest Missouri.

So, overnight, this turned from a one man race into a bit of a dog pile for the leadership of the Missouri GOP.

I’ll be working on doing some profiles on each of these folks.

I’m reminded how Ron Richard betrayed the GOP by reversing his votes in the last veto session and in the veto session in 2013 to block passage of some key bills. The 2013 reversal came after a mid-east junket with democrat Governor Jay Nixon. Ron Richard had earlier voted for the bills. But when it came to support the GOP, he didn’t. Richard has no core principles other than his own advancement. Consequently, I would not be a supporter for anyone connected to him.

CNBC Reporter Kelly Evans, tried to ambush Senator Ron Paul during an interview. Paul didn’t fall for the tactic and turned the tables. Before the interview left the air, Paul called Kelly’s attempts as ‘slanted’. I always like to see a lib’s plan fail. Especially when it backfires so spectacularly.

I’m not a believer that vaccines cause autism. I believe it falls into the same category as global warming—cherry picked data to fit a preconceived objective. The originator of the ‘vaccine causes autism’ cherry-picked data and actually fabricated data in a study that started this controversy. Every study since, that I’ve examined, still uses that original false study as source document.

Be that as it may, I also believe it is a parent’s right to choose which, if any, inoculations her or his child receives. The libs are pushing for mandatory vaccinations using the current measles outbreak as justification. The ‘anti-vaxxers’, as they have been called, claim that their children are the only ones at risk. Those vaccinated should not fear being infected.

That last statement, too, is false logic. First, no inoculation is 100% perfect. Some will get sick regardless. The inoculation will not work for some. Some, whose immunizations work, can still be a carrier. There is some justification for inoculation. However, the final choice still belongs to parents, not government.

The current buzz today is the straw poll conducted on the Drudge Report yesterday. Scott Walker was the clear leader of the possible GOP candidates with 46% of the votes. Ted Cruz was second with 14% and Ron Paul third with 12%.

The poll is meaningless, of course, but it did create a storm of discussion on the ‘net! For me, it was a toss-up between Walker and Cruz. I’m more aligned, politically, with Ted Cruz. On the other hand, Scott Walker has proven to be a fighter and the GOP needs a fighter. There are none in Washington, DC.