There are a number of items in the news today. The top story is the rebellion in the GOP House ranks against John Boehner. The MSM, including FOX, poo-poos the idea that Boehner can be turned out. Other commentators, however, believe there is a significant chance to oust Boehner.

Two GOP candidates have stepped forward to run against Boehner. The strongest is Louis Gohmert (R-TX). But there is a second candidate, too, Rep. Ted Yoho (R-FL). Gohmert is a strong conservative track-record. I don’t know much about Yoho other than he’s running against Boehner.

In the end, it matters not, who of these candidates receives the votes. The important thrust is that at least twenty-nine GOP Representatives—DON’T VOTE FOR BOEHNER! If Boehner loses the first vote, then the GOP can consolidate with another candidate, Gohmert I would hope, to choose another Speaker and put Boehner out on the curb.

I’ve already heard some RINOs say that a vote against Boehner is a vote for Pelosi. Not true, it’s another lie by the GOP establishment. The only way a ‘Pub can vote for Pelosi is to actually vote for her, or, to vote, “Present,” to reduce the number of votes cast. Boehner needs the majority of the votes, not just the highest number of votes. If he doesn’t get a majority, he loses.

A number of Representatives have already announced they won’t vote for Boehner. Many more have quietly let it be known they probably won’t. There are fifty new representative coming to Congress. Many of them ran on a ticket of opposing John Boehner. At first look, getting twenty-nine ‘Pubs to vote against John Boehner seemed impossible. When you look more closely, that impossibility fades.

A number of talk show hosts, Glenn Beck for one, are telling their audience to call the Capitol switchboard,1-877-762-8762, to speak to their representatives and to tell them to not vote for Boehner. The switchboard is being flooded and was shutdown once already this morning.

The real thing that has the left outraged is not the photo of her son stepping on the family dog (it was a big dog. PETA looked the other way when Ellen Degenerate posted one like it,) but her 2014 award of being the top American Achiever.

The left rejects achievement. It is their antithesis. Achieving, in their minds, means someone loses, therefore achievement must be limited to be ‘fair.’

It would be the height of churlishness for even the most inveterate leftist to deny the import of someone who made Time magazine’s “100 Most Influential People” list, and then the Smithsonian Institution‘s “100 Most Significant Americans Of All Time” list.  Both affirmations were earned by former Alaska governor and vice-presidential candidate Sarah Palin.

To then accept Governor Palin as “American Achiever of the Year 2014” would be for most, if not all on the left (and to be fair, many in the GOP) no doubt a bridge too far.  However, such partisanship should not stand in the way of a general acknowledgement of what was a remarkable year for Palin.

Palin achieved what such luminaries as President Obama did not: a place in the Smithsonian’s prestigious “Most Significant” list.  After being written off by many in the media, and especially the left, as “irrelevant” and predicted by MSNBC’s Krystal Ball as “not going to have an effect on the [2014] midterms,” Palin’s record of success of her endorsed candidates was nothing short of phenomenal. (The article continues on the American Thinker website.)

Sarah Palin is never far from conservative’s minds. She is the epitome of conservatism. Maligned and slandered by the left, she continues on, unrepentant, and speaks her mind. The left hates her with a passion because she is the standard the left hates and cannot beat.

The Many Memes of Sarah Palin

Defining a politician’s personality, whether positively to build them up, or negatively to tear them down, is a basic rule of politics. Themes can define an image e.g. “Roosevelt’s categorization of Al Smith as “The Happy Warrior” or Democrat folklore depicting William Jennings Bryan as “the Great Commoner” are two classic positive examples. On the negative side, Mitt Romney never recovered from being defined as “Mr. 1 percent”, nor did John Kerry from being “Mr. Flip Flop.”

Once a politician is defined (fairly or unfairly doesn’t enter into the picture) as say, Rick Perry was as a forgetful ditherer, it becomes extremely difficult to shake off the perception — even though in his case it was based on a single, admittedly important, debate moment. Such is the power of media defining that an entire career as a successful governor of a major state can have that whole positive history shrouded in the fog of a slip of the tongue or a moments’ forgetfulness.

This eternal and unshakable truism seems to have one, and perhaps the only one exception to the rule, and that is Governor Palin. Once the media got over their initial shock at her 2008 convention address, the entire subsequent campaign was involved in a liberal media/blog attempt to stick a permanent, negative label on her. That a flow of constant new Palin memes continues to this day shows that for all their efforts nothing has stuck irrevocably and fatally detrimentally.

Before Palin’s convention address there was some flailing about by a confused media and a number of memes were tried out. “Palin’s a bad parent neglecting her children, especially the special needs one, for a campaign”. That such nonsense has never been used against a man, and the anger of many women at such a ridiculous concept put paid to that quickly. Next was “Palin’s a hypocrite because her daughter is pregnant” which quickly died after Palin describe her family as “having the same ups and downs as all families” which, rightly received an understanding and warm reception. There was even a despicable campaign from the likes of Daily Kos and the even wilder “progressive” fringes, which suggested Trig might not even be Sarah’s child.

After the Gibson interview the left crowed “Palin doesn’t even know what the Bush doctrine is”. As it turned out neither did 90% of the population either — it being unlikely that if the question was put to those crowing they could have answered it, so that quickly died the death. What did have legs, and is only 6 years later fading from the arsenal of even the lowest information voters, was the “I can see Russia from my house” statement. This line, of course, was not even spoken by Palin but had a life of its own, which is a sad reflection on some segments of the population.

Twenty-Fifteen is starting off with a bang!

I started the day off thinking it was Saturday. On occasion, retirees like myself have difficulty remembering what day it is. Why? Because more often than not, one day seems more like another. That is one reason why I’ve tried to maintain the same habits I had when I was working. I’m usually successful. Today, I was not. 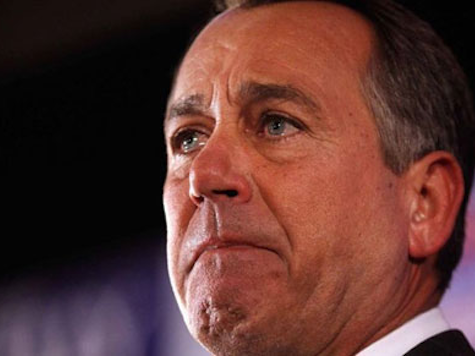 Next week on January 6, 2015, the House will vote for the Speaker of the House publicly on the House floor. John Boehner and Nancy Pelosi are running. Conventional thought says Boehner is a shoo-in.

The rushed passage of the CRomnibus funding bill upset…no, that is too mild a word, enraged GOP voters from one end of the country to another. It was viewed as a betrayal by Boehner and the GOP establishment leadership by preventing the GOP from using the power of the purse to control Obama, amnesty, et. a., and it was!

Next week, the House will choose a new Speaker. The winner will have to acquire a majority, not a plurality,  of the votes. There are 435 members in the US House of Representatives. That means, if all vote, the winner for Speaker must have 218 votes to be Speaker. If any Representative refuses to vote or votes, “present!”, the number of votes needed to win decreases.

Remember, it is not the candidate who gets the most votes that wins the Speakership, it is the one who receives the majority of the votes cast. There is a difference, a big difference in those two words: majority vs. plurality.

Eric Erickson is the guest host for Rush Limbaugh today. He reminded us that all it takes to remove Boehner as Speaker is for 29 ‘Pubs to vote for someone else—not Pelosi, not to not vote, just vote for ANY other ‘Pub and Boehner loses. They don’t even have to vote for the same ‘Pub, each could vote for a different Representative and if Boehner doesn’t get the majority of the votes cast, he’s out.

By various counts, the rebels need only four to six ‘Pub votes to block Boehner next week. Many other think they have a real chance of doing just that.

Crominbus was the last straw. Conservatives are now absolutely livid at the RINO Establishment. Rarely, if ever, has such an unmistakable voter mandate been so brazenly nullified before the newly elected could even take office. Calls escalate to “end” the Republican Party because conservatives cannot change it. By contrast, Rush Limbaugh, while lamenting that “the losers in the last election [got] pretty much everything they want[ed],” nevertheless rejects the third party call: “taking over the Republican Party is better.”

Sarah Palin protests that what House Speaker John Boehner and 162 Republican “yahoos” did “stinks to high heaven,” for which Rep. Gohmert expects Boehner to be rewarded with Democrat votes for speaker. Palin declares open season on RINOs, including replacing Boehner. Conservatives find it especially galling — and intolerable — to have a Speaker who (a) shows utter contempt for the representatives whose election resulted in his ascension to power; and (b) does everything he can to subvert the wishes, interests and values of these representatives and their constituents.

It could take years replace or seize control of the Republican Party, by which time everything this country has stood for could be destroyed. However, there is a clearly viable short term strategy. Oust Boehner from the speakership — now!

If the 2014 and 2010 elections are to have any meaning at all, if all the work and promises made to elect Republican majorities in both houses of Congress are not to be completely nullified, replacing Boehner must be considered the top priority. (Although Senate Republican Leader Mitch McConnell deserves recognition for his zealous defense of freedom of speech, he too should be replaced because he is a RINO stooge, as Andrew McCarthy makes plain. However, due to different House and Senate procedures, what follows is confined to Boehner.)

The article is long, the meat of it is too long to quote here. Go to the website and finish reading it. It’s worth your time. There are other articles on this same subject, here, here, and here.